“You came here to kill me, so do it!!” We’re almost at the end of it all, it’s just around the corner. Universal will be debuting the slasher horror grand finale Halloween Ends in October in just a few more weeks. The first trailer launched back in July, and a new promo featurette has been unveiled this week to begin the final marketing push. Is anyone still excited to watch this… or not? They shot this one back-to-back with last year’s Halloween Kills (which had mixed reviews), and it’s being released exactly one year later. The saga of Michael Myers and Laurie Strode comes to a spine-chilling climax in this final installment of the franchise – set four years after the events of Halloween Kills (read our review of that one). Even after the entire town went after him in the last movie, he remains an unstoppable and unkillable evil force. Jamie Lee Curtis returns as Laurie Strode, joined by Andi Matichak, Will Patton, Rohan Campbell, & Kyle Richards, plus both Nick Castle and James Jude Courtney credited as playing “The Shape”. There’s not much to this featurette, which focuses on Jamie Lee Curtis & her legacy with these films. I just hope this one is good. 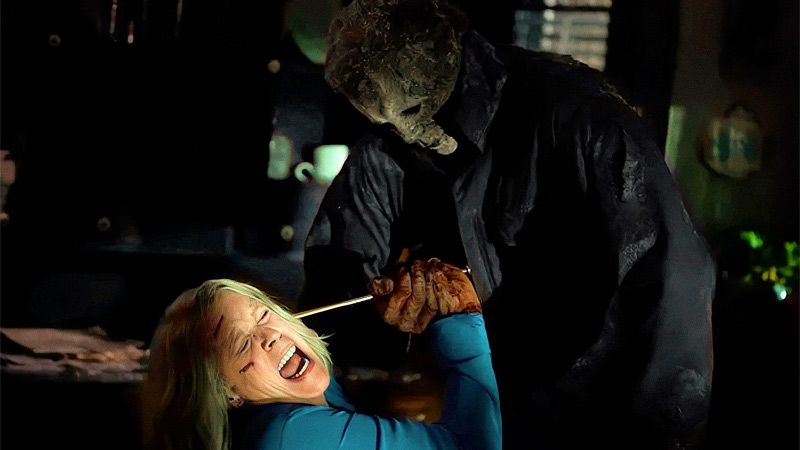 You can rewatch the full official trailer for DGG’s Halloween Ends right here, to see even more footage.

Four years after the events of last year’s Halloween Kills, Laurie is living with her granddaughter Allyson (Andi Matichak) and is finishing writing her memoir. Michael Myers hasn’t been seen since. Laurie, after allowing the specter of Michael to drive her reality for decades, has decided to liberate herself from fear and rage and embrace life. But when a young man, Corey Cunningham, is accused of killing a boy he was babysitting, it ignites a cascade of violence and terror that will force Laurie to finally confront the evil she can’t control, once and for all. Halloween Ends is again directed by acclaimed American filmmaker David Gordon Green, of the films George Washington, All the Real Girls, Snow Angels, Pineapple Express, Your Highness, The Sitter, Prince Avalanche, Joe, Manglehorn, Our Brand Is Crisis, Stronger, and the other two Halloween + Halloween Kills movies previously. The screenplay is written by Chris Bernier, David Gordon Green, Paul Brad Logan, and Danny McBride; based on characters created by John Carpenter and Debra Hill. It’s produced by Jason Blum at Blumhouse, plus Malek Akkad and Bill Block. Universal opens DGG’s Halloween Ends in theaters exclusively starting October 14th, 2022 this fall. Look good? Who’s ready?