Every movie genre contains numerous movies whose purpose is nothing more than to entertain viewers with basic ingredients. Whether it’s a generic rom-com starring a charming cast or a mission-driven action flick filled with high-adrenaline moments. I will stand my ground and defend that there are no problems with enjoying straightforward stories on an empty weekend afternoon. That said, personal expectations for the investigative murder mystery sequel Enola Holmes 2 were precisely the same as for the original Netflix film from 2020, so I was surprised that the sequel managed to surpass its predecessor in several aspects.

One of my big issues with the original Enola Holmes has to do with the main narrative. Since the premise consists of following a detective from the Holmes family trying to solve a case, it’s only natural to expect a mystery containing multiple shocking twists, storylines, and revelations. The first film partially disappoints in that regard by focusing more on an uninteresting romance throughout, besides not being able to actually surprise anyone since it’s extremely predictable the whole way through.

Fortunately, screenwriter Jack Thorne writes a much more intriguing, mysterious screenplay in his second attempt. With the original cast returning along with some welcome new additions, Enola Holmes 2 presents a more complex, multi-layered story that intertwines in a very satisfying manner. The twists hold enough impact to catch some viewers off guard, but even if they don’t drop any jaws, they’re well executed and arrive at the right moments – pacing is much better controlled, with the film’s two hours going by quickly.

Director Harry Bradbeer retains the unique visual style of the original, which fits this world like a glove. From the on-screen drawings to put the audience right in Enola’s mind, to the enlightening, amusing fourth-wall breaks, Enola Holmes 2 boasts an audio-visual production value that will easily please all kinds of cinephiles. It might be controversial to write this, but it’s a perfect movie for streaming. It’s an experience packed with light entertainment that should leave viewers smiling and scratching their heads. 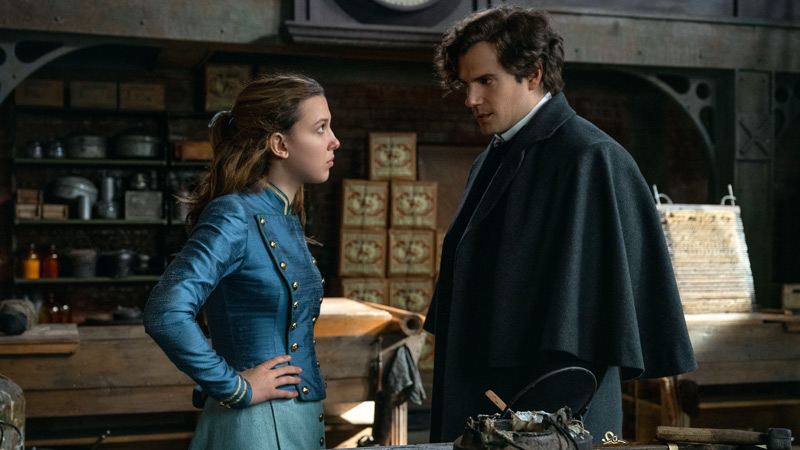 The cast is primarily the reason behind the success of these films. Millie Bobby Brown was born to play the role of Enola Holmes and continues her extraordinary evolution as an actress, as well as a producer now, demonstrating tremendous versatility in interpreting dramatic, romantic, and comedic scenes. My personal bet that she will be the youngest ever to win the Oscar for Best Actress still stands. Her chemistry with the rest of the actors in Enola Holmes 2 is fantastic, especially with Henry Cavill – the experienced actor has a lot more screentime as Sherlock this time around, with many pros and cons.

On one hand, any film would benefit from having Henry Cavill on screen, so the more the spotlight is on the actor, the better… except when the story isn’t about his character. Enola Holmes 2 is somewhat based on a real movement for women’s rights in England’s history. The whole movie concentrates on transmitting a message of female empowerment and independence. Thorne builds an engaging plot around this theme, but Sherlock takes the reins of the narrative far too often shifting the focus away from this story.

From saving Enola multiple times, to scenes where he exhibits his superior intelligence – solving clues in mere seconds while Enola takes hours – Sherlock holds immense narrative impact for a story that’s far from being about him. Even the introduction of classic characters from the Holmes universe stands out more as an attempt to draw the attention of fans of the franchise than properly presenting possible new cases / opportunities to Enola. That said, Enola Holmes 2 also includes sequences where Enola impresses Sherlock, so the scales balance in the end.

Enola Holmes 2 maintains the levels of light, adventurous fun of the original, surpassing it overall due to a much more cohesive, intriguing central narrative, in addition to overall better pacing from director Harry Bradbeer. The different storylines mesh together nicely, and Bradbeer’s distinctive visual style remains a standout element. Millie Bobby Brown shines as Enola, as does Henry Cavill as Sherlock – the latter even too much, sometimes stealing the spotlight from a female empowerment story partially based on a real event with a significant impact on the evolution of women’s rights. Highly recommend it for weekend viewing.