Review: Edward Berger’s Adaptation of ‘All Quiet on the Western Front’

With the exponential growth of streaming, highly anticipated cinematographic works with high production value inevitably will end up being seen on one’s tiny home screen (or mobile phone) rather than on the giant screen found in movie theaters. Despite constantly feeling sorry for not watching certain movies on the big screen, I believe a peaceful, satisfying future for all viewers involves offering both options for watching a film. Thus, everyone can choose the “format” they prefer for their experience, and no one is bothered. That said, Edward Berger’s latest adaptation of All Quiet on the Western Front deserves to be seen on the biggest screen and with the best possible sound conditions, as it’s undoubtedly one of the best films of 2022.

Directed by Edward Berger, the movie automatically holds two aspects that, in some way, hinder a greater enjoyment of it for some people. Even without knowing the budget of All Quiet on the Western Front, all the technical aspects “reek” of grandiose cinema, the type that induces chills in any viewer due to the numerous epic, memorable moments. No matter how hard any spectator tries, they will never be able to replicate the theatrical experience at home, partially “damaging” the cinematic immersion. However, the most significant barrier will be the fact that it’s a German-spoken film…

I don’t intend to turn this review into an editorial about the persistent injustice floating over foreign / subtitled movies, but the undeniable truth is that many viewers will ignore this flick solely because the main language isn’t English. If this new adaptation of All Quiet on the Western Front was directed by Sam Mendes, Christopher Nolan, Quentin Tarantino, or another world-renowned Hollywood filmmaker, even occasional audience members would book tickets in advance to an IMAX theater that would be sold out for an entire weekend. They would probably leave said theater considering the film “one of the best ever”.

Don’t be fooled: All Quiet on the Western Front is a must watch film (even on Netflix). The screenplay, written by Berger, Lesley Paterson, and Ian Stokell, adapted from the seminal Erich Maria Remarque novel, covers the final years of The Great War in Europe, following a German soldier, Paul Bäumer (Felix Kammerer), who’s excited to join the country’s army with his friends with the hope of becoming heroes. The screenwriters demonstrate the cruelty, ruthlessness, and brutality of war through emotionally powerful developments, proving that there’s no “good side” or “bad side” in a horrific occurrence of this type.

Berger’s films features no narrative or visual restraints, making it one of the most uncomfortably realistic (anti-)war movies I’ve ever witnessed. Technical details such as costume design or makeup achieve a surprising impact by loading soldiers with dust, mud, dirt, blood, and anything else that makes it impossible for a uniform to have an inch of clean fabric. Whenever the camera focuses on the trenches, the atmosphere gradually intensifies until it’s time for another impressively captivating new action set piece. 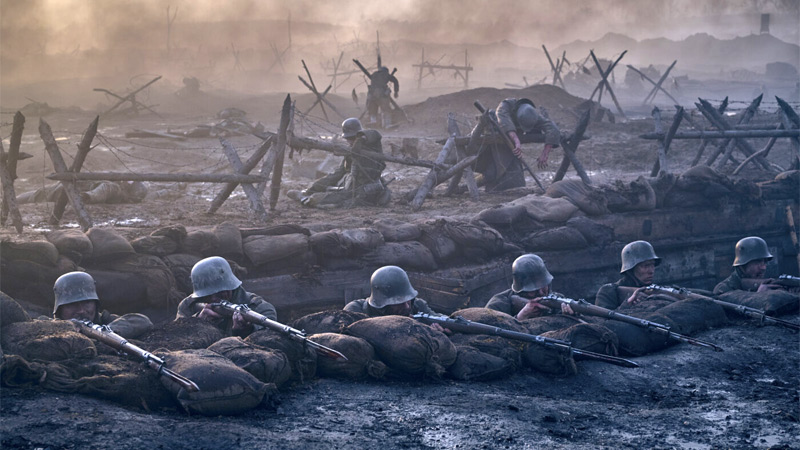 The film is one the most extraordinary cinematographic works of the last few years – if this doesn’t earn multiple nominations, it will be a tremendous injustice. James Friend, the film’s Director of Photography, uses long, uninterrupted tracking shots to follow the army’s attempts to gain a couple of more meters in the seemingly endless battlefield. From the choreography of everyone involved – as deserving of praise as Sam Mendes’ 1917 – to the camera work itself, not forgetting the impactful score by Volker Bertelmann, All Quiet on the Western Front makes the majority of blockbusters from the last two decades mad with envy.

We begin with one of the most immersive, tense opening sequences of the year, followed by a story focused on distinct characters who go through unsettling developments in the trenches. Finally, we conclude with a thematically rich ending that conveys the essential message: war accomplishes absolutely nothing positive for anyone. All through Friend’s stunning lens and Berger’s firm direction. Both work together brilliantly, creating a technically near-perfect picture, but the main story doesn’t fall behind the audiovisual elements.

Building on the superb, dedicated performances of the entire cast, All Quiet on the Western Front explores each soldier’s method of dealing with war traumas. Some feel the pressure from the get-go, breaking down in tears as the first shots fly by and explosions land nearby. Some are so carried away by the violence that they become homicidal machines with a single goal: survival. And some even begin to give in psychologically to the point of transporting themselves to an unreal world where dreams can indeed come true.

It’s rather easy to form a strong emotional bond with the young soldiers due to their relatable personalities and especially their austere motivations to return to those they love or continue on with a normal life. All Quiet on the Western Front also does an excellent job of frustratingly comparing socio-political classes. While millions die (allegedly) fighting for the good of their country, starving and thirsting, the military and politicians in high positions sleep in comfortable beds, overeat and even leave leftovers for their dogs. All this when all that’s necessary is to sign a measly paper to establish peace.

This political hypocrisy and even the harrowing violence of the war itself are demonstrated in the most disturbing, inhumane way possible, transmitting the anti-war message efficiently. It’s difficult to find major issues with All Quiet on the Western Front. Only the political storyline suffers from a lack of more breathing room to be creative, following a formulaic, uninteresting path. With a runtime well over two hours, the length is justified, but the transitions between the slower political subplot and the extreme intensity of the war slightly affect the movie’s overall pacing. Other than that…

All Quiet on the Western Front is, by far, one of the best films of 2022! An emotionally powerful anti-war epic that portrays World War I in an accurately cruel, merciless, disturbing, truly traumatic manner through the gradually more sensitive eyes of a young German soldier. A two-and-a-half-hour tense, brutal, extremely captivating runtime, primarily due to some of the most astonishing cinematography in recent years – Roger Deakins would be proud of DP James Friend’s masterful work, which deserves to be admired on the big screen. Equally impactful score. Hypnotizing performances. I tend to avoid over-the-top reactions, but after checking countless lists with movies from the genre, it’s challenging to find many that are superior to this brilliant adaptation by Edward Berger. One of the best war films of the CENTURY!