“A lion doesn’t lose sleep over the opinion of sheep.” Picturehouse in the UK has revealed another trailer for the indie Austrian drama Corsage, from award-winning Austrian filmmaker Marie Kreutzer. This one is opening in both the US and the UK at the end of December right around the holidays, playing exclusively in art house theaters. It’s also Austria’s submission to the Academy Awards this year. Empress Elisabeth of Austria, referred to as “Empress Sisi“, is best known for her beauty and fashion trends. But in 1877, she celebrates her 40th birthday and must fight to maintain her public image. With a future of only ceremonial duties in front of her, she rebels against her public image and comes up with a plan to protect her legacy. Vicky Krieps stars as Elisabeth in the film, along with Florian Teichtmeister, Jeanne Werner, Alma Hasan, Finnegan, and Colin Morgan. Not one of our favorite films this year, an acquired taste I might say (I recommend skipping it entirely). But some may find it peculiar and fascinating. Give it a look below.

You can also rewatch the official US trailer for Marie Kreutzer’s Corsage right here for more footage. 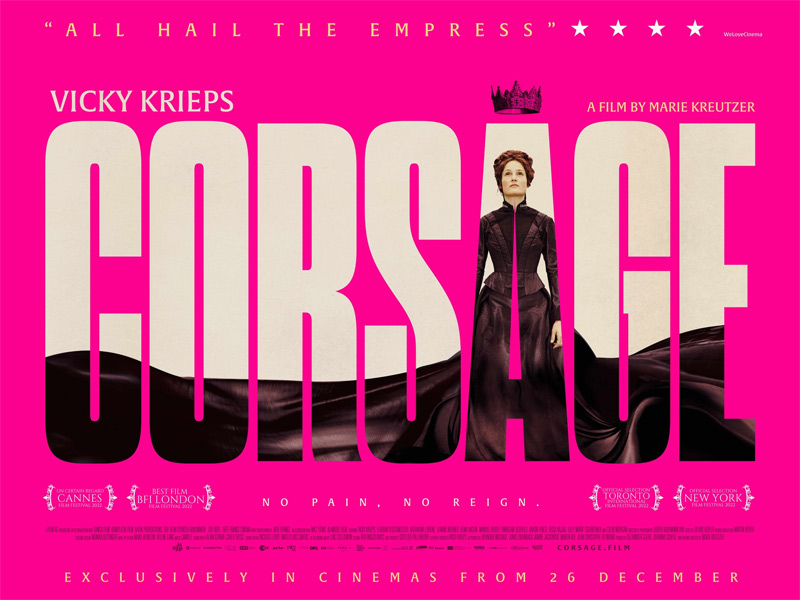 Written and directed by Kreutzer, Corsage follows Empress Elisabeth of Austria (Vicky Krieps), one of the most magnetic royals of the 19th century, who was idolized for her beauty and renowned for inspiring fashion trends. But in 1877, ‘Sisi’ celebrates her 40th birthday and must fight to maintain her public image by lacing her corset ever tighter. While Elisabeth’s role has been reduced against her wishes to purely performative, her hunger for knowledge and zest for life makes her more and more restless in Vienna. She travels to England and also to Bavaria, visiting former lovers and old friends, seeking the excitement and purpose of her youth. With a future of strictly ceremonial duties laid out in front of her, Elisabeth rebels against the hyperbolized image of herself and comes up with her own unique plan to protect her legacy…

Corsage is written and directed by acclaimed Austrian filmmaker Marie Kreutzer, director of the films The Fatherless, Gruber Is Leaving, We Used to Be Cool, and The Ground Beneath My Feet previously. It’s produced by Alexander Glehr and Johanna Scherz. This initially premiered at the 2022 Cannes Film Festival earlier this year, and it already opened in Germany/Austria in July this summer. IFC will debut Kreutzer’s Corsage in select US theaters starting on December 23rd, 2022 later this year. Anyone want to see this?

Who Is King at the End of ‘Wakanda Forever’?