“You gotta know your risk.” “There was no risk until you came along.” Paramount has revealed an official trailer for their mafia series Tulsa King, streaming this November on Paramount+. Not too much longer to wait now. It’s created by two very talented writers: Terence Winter of HBO’s “The Sopranos” & “Boardwalk Empire”, plus Taylor Sheridan of “Yellowstone”, “1883”, and great movies like Sicario and Hell or High Water. The series stars Sylvester Stallone as “The General” – an Italian mobster who is faced with the startling task of reestablishing his Italian mafia family in Tulsa, Oklahoma after he gets out of prison. He slowly builds a new “crew” from a group of unlikely characters, to help him establish a new empire in this strange town. It also stars Andrea Savage, Martin Starr, Max Casella, Domenick Lombardozzi, Vincent Piazza, Jay Will, A.C. Peterson, plus Garrett Hedlund. This trailer makes this series seem so cheesy, but I also think the awkwardness of an East Coast mobster in Oklahoma is the whole point. Might be worth watching mostly because Taylor Sheridan is involved – he always whips up compelling crime stories. 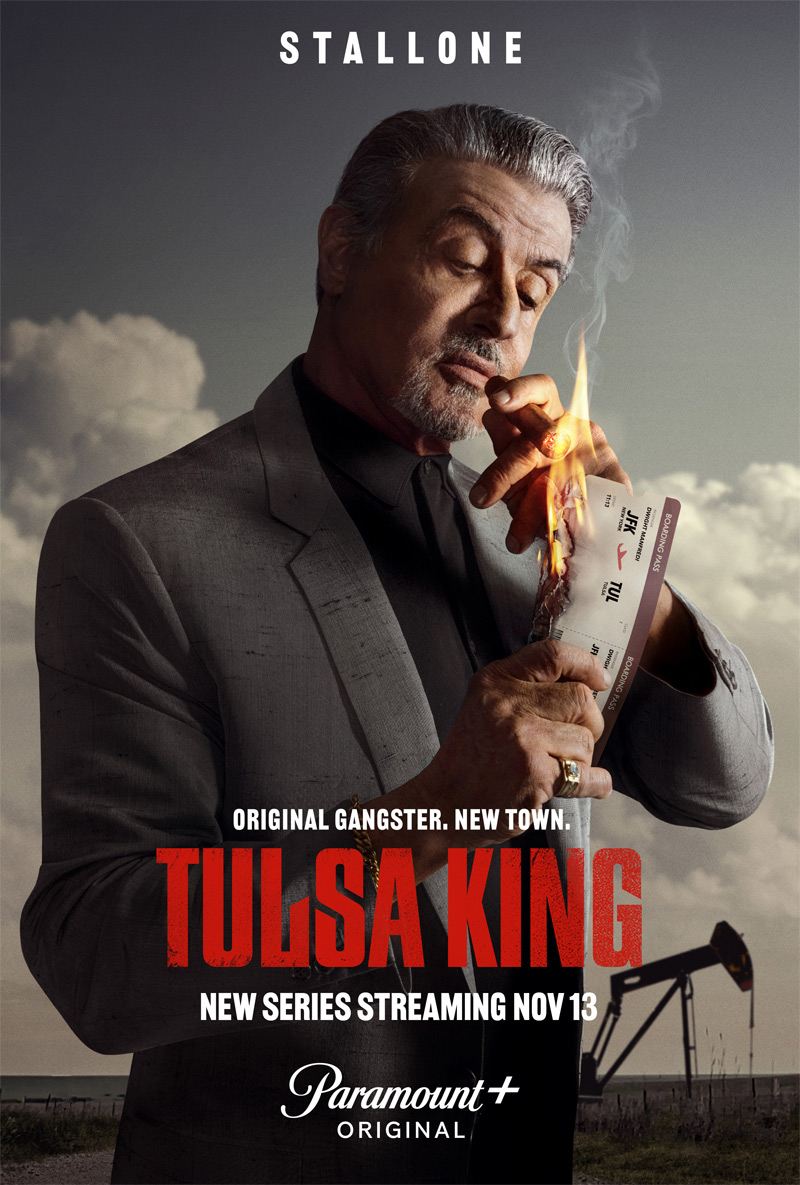 You can rewatch the first look teaser for Paramount+’s Tulsa King series here, for a bit more footage.

Tulsa King follows New York mafia capo Dwight “The General” Manfredi (Sylvester Stallone), just after he is released from prison after 25 years and unceremoniously exiled by his boss to set up shop in Tulsa, Okla. Realizing that his mob family may not have his best interests in mind, Dwight slowly builds a “crew” from a group of unlikely characters, to help him establish a new criminal empire in a place that to him might as well be another planet. Tulsa King is a series created by writer Terence Winter (“The Sopranos”, “Boardwalk Empire”, Get Rich or Die Tryin’, The Wolf of Wall Street) & writer / director Taylor Sheridan (“Yellowstone”, “Mayor of Kingstown”, “1883”, Sicario, Hell or High Water, Wind River, Without Remorse, Those Who Wish Me Dead). No episode directors have been revealed yet. The series is executive produced by Sheridan, Winter, Stallone, David C. Glasser, Ron Burkle, Bob Yari, David Hutkin, Allen Coulter, and Braden Aftergood. Produced by MTV Entertainment Studios and 101 Studios. Paramount debuts the Tulsa King series streaming on Paramount+ starting November 13th, 2022 coming up. Who wants to watch?

Kate Hudson's Dress at the Glass Onion Premiere in London