Full Trailer for ‘Bones and All’ with Timothée Chalamet & Taylor Russell

“Sanctify, sanctify.” MGM has revealed the main official trailer for Luca Guadagnino’s new horror love story Bones and All, arriving in theaters this November. The film premiered at the 2022 Venice Film Festival, where it won Best Director & Best Young Actor, and it also played at the Telluride Film Festival recently. Adapted from the book by Camille DeAngelis, the film is about a relationship that begins between Maren and Lee, two youngsters “surviving on the margins of society.” The story is also about cannibals on the run, trying to contain themselves and not get into more trouble. Bones and All is “a very romantic story, about the impossibility of love and yet, the need for it. Even in extreme circumstances.” The score is composed by Oscar winners Trent Reznor and Atticus Ross. Timothée Chalamet and Taylor Russell co-star, with Michael Stuhlbarg, Mark Rylance, Chloë Sevigny, Jessica Harper, David Gordon Green, André Holland, Jake Horowitz, Francesca Scorsese, & Anna Cobb. This is a great trailer that clearly points out – this is horror! But there is a sensitive, soft side to it about these two young lovers. Check it out below.

Here’s the main official trailer (+ poster) for Luca Guadagnino’s Bones and All, from MGM’s YouTube: 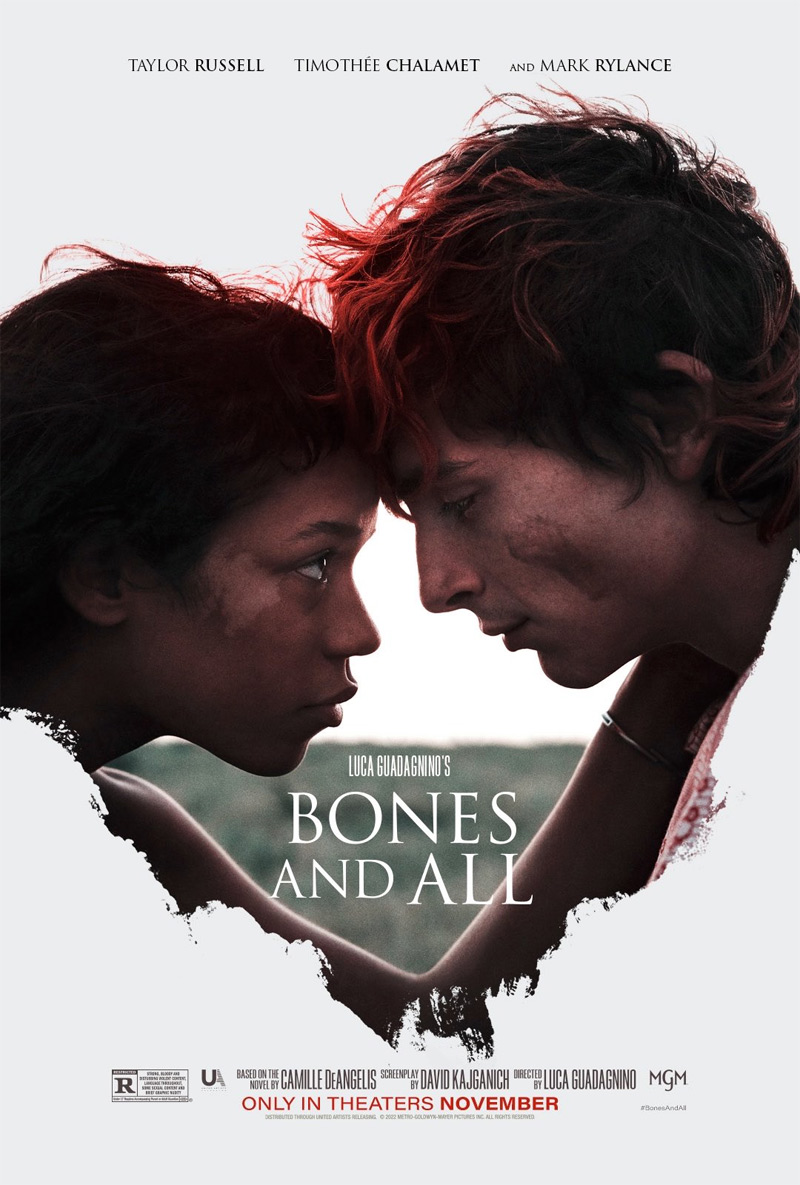 You can rewatch the first short teaser for Guadagnino’s Bones and All here, to view the first look again.

A story of first love between a young woman learning how to survive on the margins of society and an intense and disenfranchised drifter, as they meet and join together for a thousand-mile odyssey that takes them through the back roads, hidden passages and trap doors of Ronald Reagan’s America. But despite their best efforts, all roads lead back to their terrifying pasts and to a final stand that will determine whether their love can survive their otherness. Bones and All is directed by acclaimed Italian filmmaker Luca Guadagnino, director of the films The Protagonists, Melissa P, I Am Love, A Bigger Splash, Call Me By Your Name, and Suspiria previously. The screenplay is written by David Kajganich (The Invasion, Blood Creek, True Story, A Bigger Splash, Suspiria); adapted from Camille DeAngelis’ novel of the same name. Produced by Luca Guadagnino, David Kajganich, Francesco Melzi d’Eril, Lorenzo Mieli, Marco Morabito, Gabriele Moratti, Lisa Muskat, Theresa Park, Peter Spears. This just premiered at the 2022 Venice Film Festival earlier this month. United Artists & MGM will be releasing Guadagnino’s Bones and All in select US theaters starting on November 23rd, 2022 (during Thanksgiving week) this fall. Who wants to see this?