“She’s coming closer…” Get a first look at this!! An early trailer has been unveiled for an action adventure movie titled We Hunt Giants, made by Swedish filmmaker Titus Paar. It’s being shot and filmed entirely on location in the snowy hills of Sweden, produced by an FX company who is helping handle the creation of the dinosaurs on screen. In a world where cavemen and dinosaurs share the world, a tribe is plagued by a man-eating giant T-Rex that hunts them all. Rougu, the son of the village chief, realizes the only way he can stop the beast is to hunt it down. Nothing else will make it stop. Titus explains that he, “wanted this to be the first gritty high-end R-rated Dino movie. A bloody adventure about survival and risking everything for the ones you love.” Starring Andreas Rylander and Magnus Samuelsson, with Urban Bergsten. This is only a first look trailer with barely 45 secs of footage, but I’ll be damned, looks good and I’m in already. Still in production, this is expected sometime in 2023. I’ll definitely be keeping an eye out for more updates. 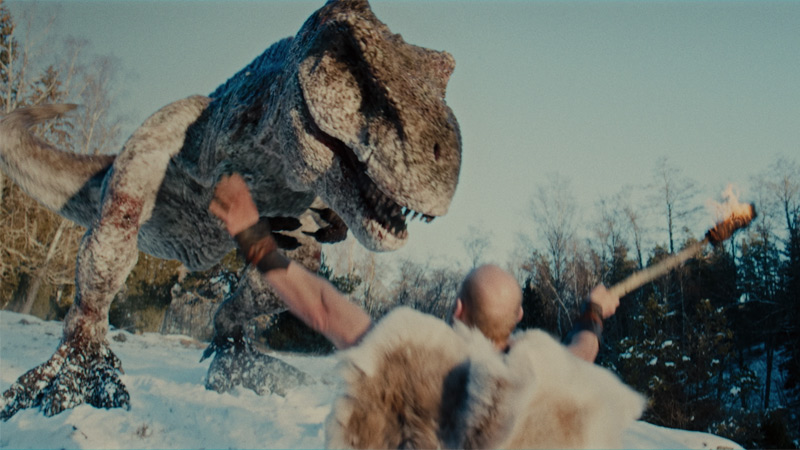 In a time where cavemen and dinosaurs share the world, a tribe is plagued by a man-eating giant T-Rex that hunts them all. Rougu, the son of the village chief, has his woman and his entire village captured by a witch-doctor tribe in the same area. They believe that the only way to calm the beast is to sacrifice his woman’s beautiful flesh. Rougu realizes that the only way to save their village is do what no man has ever done before… Hunt the Giant. We Hunt Giants is both written and directed by Swedish filmmaker Titus Paar, director of indie films Gold Fever, Killer Dogs, Hydra, Grandma Is a Punkrocker, and The Perfect Weapon previously, plus tons of other short films. Also produced by Titus Paar, co-produced by Andreas Feix. Paar Productions AB & Eclipse FX. Filmed in the snowy hills of Sweden, 100% on location. Paar’s We Hunt Giants is still in production and will debut in late 2023. Stay tuned for more. How does it look so far?

Mark Tremonti Says a Creed Reunion Is 'A Matter of Timing'