Warning: The following contains spoilers for Sunday’s eventful episode of The Walking Dead. If you haven’t watched yet, you may want to do so before reading on.

The term “a doozy” was all but coined to describe Sunday’s episode of The Walking Dead. As Pamela’s troopers led a swarm toward the Commonwealth, all so that she could go through the motions of a lockdown, Aaron, Jerry and Lydia became separated from Elijah, Luke and Jules. Lydia tried so desperately not to let go of her boyfriend as he was swept away by the horde that she wound up being bitten. (Goodbye, arm!) Later, Jerry insisted that it would be as “easy as cobbler” for him to go find the missing members of their party. (Goodbye, Jerry?)

In other developments, Pamela, beyond suspicious of Mercer in the wake of Eugene’s “disappearance” from custody, had Max’s brother arrested. At the same time, Daryl, Carol, Judith, Negan, Gabriel, Rosita, Maggie, Princess… Basically, most of our regulars snuck into the Commonwealth train station, where the governor had an ambush waiting for them. Pamela even picked up a machine gun herself and took aim at Maggie, only to have Judith push her out of the way and — gulp — take the bullet herself!

As the hour neared its conclusion, walkers — some climbers among them — made it inside the walls of the Commonwealth. Pamela’s solution? Have troopers protect the estates and divert the dead toward the lower wards. (As if we didn’t already know she was scum.) At the same time, Daryl & Co. found themselves all but surrounded by walkers. And Lil’ Ass-Kicker… In her delirium, she seemed to see “Daddy.” But had she really? To get the answer that question and more, TVL rang up showrunner Angela Kang. 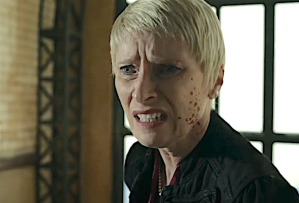 TVLINE | So, you must know that people are going to be freaking out, right? You just don’t shoot Judith Grimes.
Absolutely. This is not a story decision we took lightly. There were many many conversations about whether we do it, what happens as a result, how do we portray it in a way that is as respectful as possible…

TVLINE | What is the reason for doing it — to scare the hell out of us or just make us hate Pamela more?
In the comic book, there is a storyline about the things that the next generation goes through and sees. What is the world that their parents’ generation wants to leave behind for them? That is a major theme that we went into the final run thinking about. So this story kind of evolved out of that. There’s a really important emotional dynamic that rises out of what happens next for Judith and for Daryl. Even Pamela is like, “What have I done?” Because you know, you kind of hope that when horrific things happen to children that people can take that step back and look at that, and I think that’s one of the things we’re exploring with her. 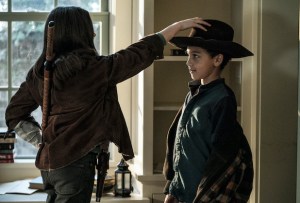 TVLINE | What’s the significance of Judith passing along to RJ the hat that used to be Carl’s that used to be Rick’s? Is that her graduation to the next generation?
In some ways, she is doing things that are so beyond her age. All of the children of this generation have been forced to grow up faster than they should have to because the world is so dangerous and in some ways doesn’t care that they are children who deserve to be protected. So for Judith, there’s this unspoken line that’s sort of like, “Now you’re having to grow up a little bit too, RJ, but you’re still a child, and this hat is going to protect you.” That’s just something that we really wanted to honor as part of that Grimes legacy, that the hat means something as it passes from person to person and is sort of protective.

TVLINE | Let’s talk about “Daddy.” Are you hoping that we’ll think that Judith wasn’t hallucinating and she really did see Rick
From Judith’s perspective, she just kind of went unconscious. She’s probably hallucinating a little bit, or at least very confused and in a sort of dreamlike state. It felt real to us as we were writing it that what she imagines and what’s been on her mind all this time is a reunion with her parents. She feels safe in somebody’s arms for a moment, and she’s wondering if Daddy came back. But of course it’s Daryl, and the kind of gut punch for him is significant… just the weight that’s on him. [With Rick and Michonne gone, and Lori long gone], Daryl is the remaining parent figure for this child. But we felt like for Judith, too, it’s an indication of where her head’s at throughout all of this. She misses her family, but she also trusts Daryl enough to feel that he’s like a daddy figure to her. 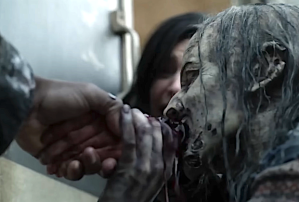 TVLINE | Did Lydia really have to get bitten? The kid had Alpha for a mother, she spent years eating worms, her first boyfriend was beheaded, and she just got a new one. I mean, come on.
She’s had a rough run, but she’s trying to find hope in the midst of that. She’s also connecting with Aaron, who’s lost an arm in this apocalypse. For Lydia, she’s going to have to figure out what it means to have this disability. But she’s still hoping she can reunite with Elijah, even though it feels very sad for her right now.

TVLINE | That’s assuming that the amputation was a success. Lydia looked like she was knocking at death’s door toward the end of the episode.
She is not out of the woods. But at the same time, there is hope in that people have survived this before. This is a story of someone who was willing to do anything to save the person that she loves. Because for her, that’s what it means to live life. She never would have done that when she was a Whisperer, because there was this survival-of-the-fittest mentality. This is how she’s really different from her mother. She doesn’t want to hurt people, she wants to help them, even if that means there are tough circumstances for her. 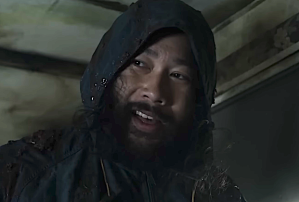 TVLINE | I was kinda stunned that Jerry would go out looking for Elijah, Luke and Jules for Lydia. He’s got a wife and kids.
We felt that Jerry has been on his own journey toward being a leader in his own small way. He was somebody who was happy to be the No. 2, the guy who was supportive of the leader. But the thing that he’s realized is that for all of them, even for him, you can’t just get by by looking out for your own interests. I think Jerry is scared. If you look at the performance by Cooper Andrews, Jerry doesn’t want to go out there, but this is what it feels like to be part of a team. Jerry is actually exceptionally brave. If you watch what the Kingdom is like, the Kingdom cares for its people. The Kingdom is brave. The Kingdom fights. So I think he feels it’s his duty to go after them. No man or woman left behind.

Your thoughts on “Family”? Drop ’em in a comment below.