In Sunday’s episode of The Walking Dead, all roads tracks led to the mysterious Commonwealth Outpost 22 that gave the episode its title. But the to-be-expected bumpiness of the path was nothing compared to the altogether unexpected surprise that awaited at the end of the road. And that was… ? Obviously something we’ll only reveal at the end of this recap, as if you don’t already know. Now then…

As the hour began, Maggie, Gabriel and Rosita, who never met a fix they couldn’t get out of, escaped from the transfer bus that was taking them to… well, who knows? But probably to the same railway work camp to which Negan, Ezekiel and Kelly were sentenced. Or maybe not; the Commonwealth appeared to have other worksites, too, which allowed its troopers to separate Negan from Annie. (So… no Dead City spinoff for her? She is conspicuously missing from the first photos.)

At the same time, Daryl and Carol stalked the train, only to find that Connie was being put on it as a — “Oh, s—t,” exclaimed a trooper — designation 2. Only later would they learn that that meant that she was being taken far away, never to be seen again. Because it’s never to Disney World and back. 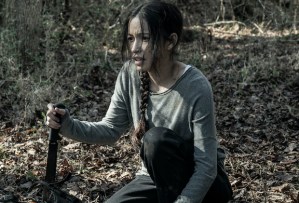 As will happen in the post-apocalyptic wilds, Maggie, Carol, Daryl, Gabriel and Rosita all found one another like old pals bumping into each other at their favorite brunch spot. Sure, along the way, there were travails aplenty, from Rosita’s dislocated arm to a chase scene straight out of Ride With Norman Reedus to Maggie’s emotional fight with the most persistent zombie kid since Night of the Comet. But they still managed to take control of the train and save Connie.

Not that that solved all of their problems. For one thing, they still had to rescue Judith, Hershel & Co. For another, the train’s driver — d’oh! — killed himself for fear of what Pamela would do to his family if he helped them. (Takes commitment to put a railroad spike through your neck, too.)

Back at railway penance camp, Negan urged Ezekiel to put his past villainy behind him for the sake of the greater good. Grudgingly, the former king agreed to try. But he didn’t know how to unite their fellow exiles without a spark of hope. Negan would provide that, he said, making it sound like he was planning a suicide mission. 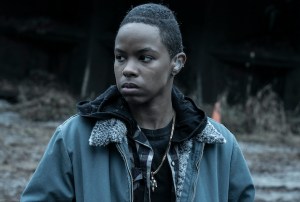 While they and the rest of the prisoners were loaded back onto a bus bound for Outpost 22 at the end of a long workday, Rosita pretended to be a trooper and radioed for help. Luckily, her message was received by an especially chatty operator (Yvette Nicole Brown?), who gave her more directions than anyone could remember and explained that Outpost 22 used to be — wait for it — Alexandria!

As the episode came to its conclusion, Daryl, Maggie & Co. were more fired up than ever to stick the series’ landing. “We are gonna get our kids, take back our home and make it right,” Glenn’s widow declared. “And Pamela is never gonna see it coming.” Won’t she, though? What with all of them having gone MIA and their one goal being to unseat the governor? Hit the comments with your reviews of “Outpost 22.”