What’s the rush? The Voice on Monday ushered in its first-ever three-way Knockouts, in which a trio of acts went head to head (to head) in hopes of advancing to the Live Playoffs. What that means is that in a single night, we blew through a dozen performances as we sped toward the final Knockouts only a week later. Dunno about you, but I’d prefer fewer Blind Auditions, smaller teams and more Knockouts (although the Battles tend to be my favorite round). Drop your thoughts in the comments below, but first, let’s review which acts were OK’d to move forward and which actually were KO’d. 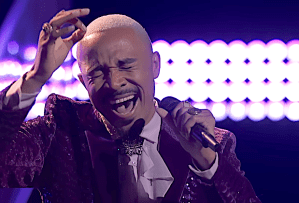 Team Blake: bodie singing “Better Now” (Grade: A-) defeated Kevin Hawkins singing “This Woman’s Work” (Grade: A) and The Dryes singing “Chasing After You” (Grade: B) — Kevin stolen by Gwen | Up first, bodie was just so casual and at ease on the Post Malone cover that he chose, he could’ve convinced me that it had been his song all along. Kevin, tackling Maxwell tackling Kate Bush, knocked my ass clean out of its seat with his range; the falsetto was impressive enough, but then he swung low as well — s—t! Last at the mic, The Dryes made the absolute most of the chemistry that led them to tie the knot, and this time around, Mr. D got more of a chance to show us that he was more than just his missus’ backup singer. But this Knockout seemed to me to belong to bodie. Kevin is arguably the more polished vocalist, but he was dinged for taking Blake’s suggestion to flip back and forth from his falsetto to his head voice. And quirktastic bodie had just sounded so natural up there — and so, so strong; those rapid-fire rhythms! — it would’ve felt weird to advance anyone else.

Team Camila: Morgan Myles singing “What the World Needs Now Is Love” (Grade: B) defeated Orlando Mendez singing “Live Like You Were Dying” (Grade: C) and Chello singing “Hold On” (Grade: D) | Even in rehearsal, though she suffered from a lack of confidence, Morgan sounded like she had this Knockout in the bag — that voice just does. Not. Quit. On stage, she went a little overboard with the hand gestures and posturing (off her coach’s advice), and took more liberties with the melody than I really cared for. But there was no denying the power and beauty of her voice. Preceding Morgan at the mic was Chello, whose innate likability wasn’t enough to distract from the fact that his performance was painfully pitchy. (“Somewhere Justin Bieber is filing a lawsuit,” cracked the friend I was watching with.) Singing last, Orlando, who dedicated his number to the beloved uncle he recently lost, turned up the charisma to 11 on his performance. The trouble is, he’s just an OK vocalist, not an OMG one. To have a career, it feels like he would definitely need studio sweetening on the regular.

Team Legend: Parijita Bastola singing “I’d Rather Go Blind” (Grade: A) defeated Valarie Harding singing “Weak” (Grade: B) and Peyton Aldridge singing “Forever After All” (Grade: B-) | Stepping into the spotlight first, Parijita didn’t so much sing her Etta James cover as altogether embody it. (Morgan Myles, this is how one looks engaged in a song.) Stunning vocal, stunning performance; never mind the Live Playoffs, definitely Finals-bound. Following Parijita was Peyton, who recovered nicely from a Battles showing that was kinda meh. He was pretty good throughout, but his Luke Combs number wasn’t all that exciting until near the end when it allowed him to roar a bit. Would actually have preferred to hear him on Orlando’s song. Batting cleanup, Valarie turned out a perfectly sultry rendition of SWV that was more full of runs than a track meet. But, as terrific as she is, her song selection didn’t really allow her to show off as much as we know she can. And in a situation like this, more is more. Unless, that is, it comes to Morgan’s gesticulating.

Team Gwen: Kique singing “Hey Ya!” (Grade: B+) defeated Rowan Grace singing “Vienna” (Grade: A) and Destiny Leigh singing “Impossible” (Grade: A-) — Rowan stolen by Blake | Rehearsal made it sound like this was going to be quite the sing-off, in particular between Rowan and Destiny. On stage, however, Kique started strong with his Outkast revamp; that voice was so creamy, it could’ve been drizzled over ice cream. I thought he’d weaken when he got to the boppy part of the number, but to my surprise, he didn’t. That was actually a blast. Stuck in the middle, Destiny had a total diva moment with her Christina Aguilera cover. She inhabited the hell out of it — that presence! That showmanship! That toughness in her voice! Before she was done, I was sure we were going to be getting a Steal. And in the night’s final performance, Rowan issued a dazzling reminder that she isn’t one of those contestants whose most impressive quality is that “Oh, wow, she’s only 16.” The kid has pipes for days, and perhaps off her coach’s advice, let her voice break in memorably emotional fashion. Gorgeous. Definitely the episode’s all-over best Knockout!

So, which cut singer(s) would you have saved? Which performances really dazzled you? And did you, too, find yourself wondering why we’re hurrying through the Knockouts by lumping three acts together in each one?

Kit Connor From Heartstopper Comes Out As Bisexual