Season 34 of The Amazing Race is ushering in a couple of shocking “firsts.” Not only has the show never kicked off outside of the United States before, but teams were surprised to learn at the starting line that there will be zero non-elimination legs this time around. If you come in last, you go home. (As if the Race needed even more stress and pressure!)

As the teams meet up in Munich, we’re introduced to a few of the newbies which include Luis and Michelle, a married couple (“raised on croquetas”) from Miami, and Molly and Emily, identical twin sisters who just met a year ago. Then of course there’s Derek and Claire from Big Brother 23, who have been dating for the past eight months. (For a full rundown of this season’s cast, click here.) The teams fly down a large log-floom-looking thing (OK, that looks like a lot of fun), and head off to meet host Phil Keoghan at Nymphenburg Palace.

When Phil drops the news that there are no non-elimination legs this season, the cast is shook. If they arrive last, they will be eliminated. Without that safety net, the stakes are at an all-time high. This season really isn’t messing around: On this very first leg, they’ve also got to self-drive themselves to three destinations before ultimately finding Phil at the Pit Stop. (Though we don’t see anyone struggling with a manual transmission, so I’m guessing the cars were automatic?) Luckily for most teams, they’re able to find heaps of English speakers in this large German city. They get some fast directions, and are off!

Here are the highlights from Leg 1’s three challenges:

ROLL | Teams must roll a beer keg back and forth through a series of obstacles in under one minute. Michael and Marcus, a pair of military brothers who have lived in Germany before, are first up, and it turns out teams have to roll the barrels around and not over the obstacles! (Who would’ve thunk it?) They laugh it off and nail the task on the second try with just one second to spare.

Rich and Dom, however, struggle hard with this one, but finally complete the task on their fourth attempt. They stick with it, but waste a lot of precious time in the process. 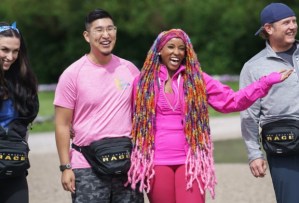 SAW | Here, the duos must saw completely through a log in order to get a piece of the pit stop clue. After noticing how much energy Rich and Dom were consuming, father/daughter duo Linton and Sharik work smarter, not harder, letting the saw do most of the work for them. Their smaller movements and teamwork do indeed make the dream work.

SMASH | Lastly, the teams must smash through a huge block of ice with a chisel. Molly and Emily, and Luis and Michelle are the first to step up for this act of frozen violence. By the time Derek and Claire get there, it seems the ice is a bit melty. He seems to smash it up in just a few quick chisels (unless that was some editing magic to make Derek look rather beastly). Regardless, Team BB becomes the first pair to get all three of their clues.

PIT STOP | The teams are directed to meet Phil at Friedensengal, the city’s Angel of Peace monument. Derek and Claire arrive to find out they’ve placed in first, winning $2,500 each! Arriving in second are Glenda and Lumumba, and placing third are Quinton and Mattie. But one team had to come in last and be eliminated, and sadly, that team was the engaged couple Aastha and Nina.

Were you happy to see Derek and Claire take the win? Which teams are your early favorites? Grade the episode below, then sound off!

Kim Kardashian, Kanye West’s Ups and Downs Through the Years