[Warning: The below contains MAJOR spoilers for the New Amsterdam Season 5 premiere.]

If you tuned into the New Amsterdam premiere to find out why Dr. Helen Sharpe (Freema Agyeman, who announced her exit between seasons) left Dr. Max Goodwin (Ryan Eggold) at the rooftop altar, you didn’t get them.

Instead, Helen sent Max a letter: “My dearest Max, if you toss this letter, rip it up, burn it, I won’t blame you. I’ve done the same to countless versions. What I did was unforgivable, to you, to our friends, to sweet Luna. It was never my intention, none of this is what I intended. Everything I ever said to you was true. Everything we had was real but so is this thing that kept me in London. Kept me from marrying you. I wish I knew what it was. I wish I could rip it out of me, obliterate it, so I could be with you.

“Because you deserve all the happiness in the world. I wish I had an explanation to help ease your pain. But none has come. All I have is the time that’s passed and the desperate hope that it heals us both. Heals your heart. Heals your mind. Heals Luna and heals our friends. Max, you are beautiful and shimmering and I was made better for being in your light. We all were. Please don’t lose your light. May it shine again even brighter than before. All my love, Helen.” But was it just us or were there hints that Max could move on with Dr. Wilder (Sandra Mae Frank)? We turned to Eggold and executive producers David Schulner and Peter Horton to get answers about that and more.

David and Peter, why write Helen out in this way?

Peter Horton: Yeah, we did not want to write her out at all. We adore her. She’s amazing. But she wanted to move on.

Schulner: Freema let us know very early near the end of Season 3 what she was thinking and we didn’t even know if we’d get her for Season 4. But Freema agreed to stay for Season 4 and give us the runway we needed to prepare her exit in case she didn’t come back for Season 5.

Horton: Her spirit around that is not contentious or frictional at all. It was just her preference for her future and her career choices. We adore her, she adores us, she misses us, we miss her. It wasn’t a thing where she was just miserable and deciding whether to stick around. It was a harmonious sort of thing. We love her. She’s a phenomenal actress, and we just wanted as much of her as we could have gotten. Will we see Freema this season?

Schulner: I would say you may not have seen the last of Helen Sharpe. That’s all I’ll tease. So stick around and find out.

Ryan, Max had to come to terms with the fact that their relationship wasn’t just love and accept the bad moments. He says he still loves her, but how is he feeling about that relationship and any possible future for them?

Ryan Eggold: Like any heartbreak, he’s mixed up and confused and at a loss and trying to figure it out and at the beginning of that journey of understanding it. We don’t yet know exactly why Helen didn’t show up. But there’s a wonderful journey that he takes with Iggy [Tyler Labine] in our first episode of maybe he’s kind of remembering it the way he wants to, of the way that things were. Max is someone who is always trying to fix things and make things better and make things perfect. He’s learning that sometimes perhaps fixing it or doing the right thing is letting someone go or giving someone space and perhaps that’s the best way to love someone. So there’s a whole lot of opportunity for Max to ask the question, where do I go from here?

That’s what I was gonna ask you, David and Peter.

Schulner: Meredith, what’d you think at the end of the episode? Oh, I have a question about the end of that episode.

There’s that look that he gave Wilder, and I also noticed something earlier after game night, so should we be reading into that? Is that more just Max being hopeful? Or is there something specific there?

Horton: No, there’s nothing specific. No, there’s no attraction there between the two of them, right? What did you feel, Meredith?

I think it’s possible. I want to hear what’s coming up for them.

Schulner: You’ll have to see. We’re not gonna tell you.

Horton: Possibility is a good thing. Schulner: I want to say, I just love the way Ryan filmed that sequence both in the montage that began the episode and then at the end of the episode, too, and the way Sandra tried to draw Max out of his sorrow and in the beginning he said, no, he’s not gonna go out. And at the end, that smile, I think, was, “Look at how much joy is right in front of me. I’d be a fool not to accept that kind of love and joy and friendship and comradery.” It was as beautiful onscreen as it was in my head as I hoped it would be.

Horton: And Sandra’s just a find. We’re so excited we found her and she brings so much to every single scene, such joy, such playfulness, and along with honest, honest emotion. We just love her. So you’re gonna see a lot of her.

Ryan, what can you say about their dynamic this season?

Eggold: I can say that in terms of Ryan talking about Sandra, working with her is fantastic. She’s super, as Peter said, playful and fun and very energetic onscreen and so great and brings great ideas. And I love a hearing and a non-hearing person communicating and sort of the divide between them and learning different ways to communicate when you take verbal language out of it. I don’t want to say too much. But it’s really fun playing scenes with her. And in that last shot that David was talking about, she was just so fun to watch onscreen. It felt playful. And I think when Max is in this moment of a little self-pitying and walling and cutting himself off from the world, you need somebody like that to sort of pull you back. And I think she did that so well in that moment.

There’s also the fact that Max still does need answers about Helen. So how much is that part of his journey this season, wanting those answers and maybe having to let go and not get them?

Schulner: I think that’s the Episode 1. I think that journey is needing answers. And then at the end of the episode, knowing that you might never get them and that has to be OK. It was Helen’s journey as much as it was Max’s.

We also see that Max is back at New Amsterdam where he belongs as medical director. How is that going? Is that a little easier this season? It seems like that’s something he can be certain about when his personal life is so uncertain.

Eggold: Absolutely. The personal life sort of falling apart, this absence of someone in his life leaves this big wealth of opportunity to reaffirm his mission, to dive back into helping people, to reconnect or get closer with Reynolds [Jocko Sims], with Iggy, with Bloom [Janet Montgomery], with Wilder and perhaps most importantly, his daughter. He’s a single dad now. I think bringing Sharpe into that was potentially something that if it’s not working out, what does that mean for Luna? I think his focus is very much shifting towards other people again, and certainly the hospital and his patients and helping and healing.

Today Show's Savannah Guthrie and Hoda Kotb: A Day in Our Life 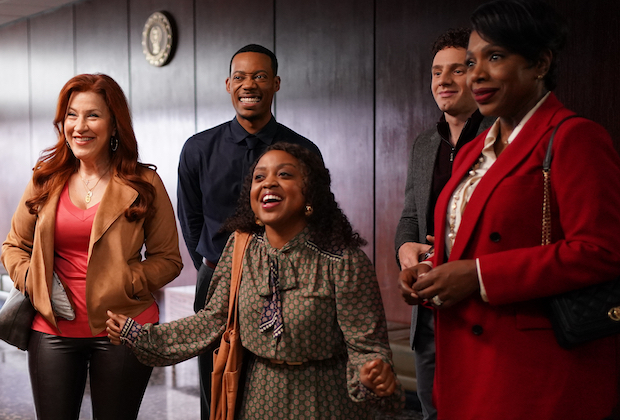