The following contains spoilers from The Lord of the Rings: The Rings of Power‘s Season 1 finale. Proceed accordingly.

With The Lord of the Rings: The Rings of Power revealing a key part of The Stranger’s identity in Thursday’s Season 1 finale, we’re one step closer to learning who he really is.

The big moment came during a confrontation with the mystics, who believed him to be their master Sauron. But the Stranger protected his Harfoot friends (which included Nori, Poppy, Marigold and Sadoc), proving that he wasn’t the Dark Lord but rather, “the other.” He was an Istari, aka a wizard.

That reveal also caught the Stranger’s portrayer, Daniel Weyman, by surprise, because he didn’t know who he was playing until just before filming the finale.

“I sat there, and I was like, ‘Whoa,’ because I didn’t know either way they were going,” Weyman tells TVLine. “I knew that he was able to harness some power from the natural world, so he had to be some sort of Maiar. But how it was going to land, I didn’t know. So, when I read that part, I was like, ‘No way! That’s who I am. All right! Here we go.’  It was an amazing moment.” 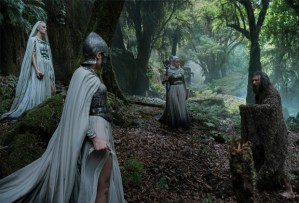 When Nori pointed out that she overheard the mystics call him “Istari,” it was the Stranger who used the word “wizard” to self-identify.

“We can see him thinking, trying to find that word but this other word’s there,” Weyman explains. “The ‘wizard’ word comes out in a very difficult, slightly shady memory sort of way.” And because the Stranger had no recollection of who he was, Weyman felt that he didn’t need know who exactly he was playing in advance and found the secrecy to be freeing.

“The very exciting stuff that I have had, we’re starting from a blank slate,” he shared. “If somebody had said to me, ‘In that first scene in the crater, you need to be playing [for example] Sauron,’ then that would have colored everything that I had gone through. We could see him figure stuff out and I didn’t have to project something onto it, and that didn’t get in the way of me experiencing the present.”

With the mystery surrounding the Stranger spanning the entire first season, fans have been filling in the blanks with their own theories about his true identity — from Gandalf the Grey to Saruman the White to the nature-loving Radagast the Brown. Whether any of these guesses are correct remains to be seen, but the Rings of Power actor is thrilled to see the audience so engaged.

“One of the things that I loved about this season was watching and listening to how the audience has taken their ownership and knowledge of Tolkien’s stories, and they’ve brought that into our world created for the telly… And that has informed them of who they think this character is actually going to be,” he says.

Who the Stranger is “might be somebody totally brand new, or it might be a named character in canon.” So does that mean Weyman still doesn’t know exactly who he’s playing just yet? According to the actor, “nobody knows what the Stranger is, other than what they’ve met.”

Nori, who’s spent significant time with him, has the closest idea of what the Stranger is. Others, meanwhile, may have “felt some change in the atmosphere or the energy of the world that they live in, but might not know anything about it yet. I think we’re going with that nobody in the world of Middle-earth knows the identity past the Stranger, and that certainly includes me [the actor].”

What did you think of the Rings of Power finale? What do you hope to see in Season 2? Sound off below.

The Game Gives First Look at Rudy the Klown