[Warning: The following contains MAJOR spoilers for The Lord of the Rings: The Rings of Power finale, “Alloyed.”]

After a season of tests and temptation, Morfydd Clark‘s Galadriel chose goodness in The Lord of the Rings: The Rings of Power finale. She was offered a seat on Middle-earth’s throne by Sauron himself, a seat he wanted to make by force.

Narratively, a hero’s journey must come with missteps forcing the hero to grow. Adhering to J.R.R. Tolkien’s books, Galadriel is the first to sense evil when it began to reveal itself in Episode 8, “Alloyed.” But unlike the books, she was far too late. Through a series of twists, the Elf heroine discovers her companion, Halbrand (Charlie Vickers), was Sauron all along. She had been escorting her enemy across Arda since jumping from her ship to Valinor, and she was the one to convince the Dark Lord — who, as Vickers described to us in a separate interview, was “repentant” and wanted to make good (or at least his version of it) — to leave Númenor and pursue a grander destiny in Middle-earth. Quite the fall from grace for our hero.

When and how did you find out Halbrand was Sauron, and what was your reaction?

Morfydd Clark: We found out when we arrived in Númenor. Me and Charlie did have suspicions, because we’d actually auditioned together, and one of the things that he had to do was read a monologue of the Devil. That was a bit like, “Hmmm, what is this?” But no talent [was] confirmed, because there were lots of options. The Stranger was a big one.

Also, we didn’t necessarily know how much he’d be in this season, whether he would be, whether his true form would be shown now. But it was really exciting. It was exciting to be able to start to spot the Easter eggs, but I still actually missed quite a lot of them. I didn’t realize until I watched it now, as it’s come out, that you never see him sleeping. Because evil does not sleep — it waits.

How many people were allowed on set when you were filming the Sauron reveal scenes?

This is what was so funny about filming their scenes. So it was so secretive, none of the other members of the cast got the scripts. It was quite funny for us, and there was no talking about it. There’d be costume fittings that would have to discuss that stuff with Charlie, and it would be a really small amount of people there. And then the raft sequence is filmed at the studios, but outside, and because it’s water, you need absolute loads of safety people. So there were so many people there, and then we were filming it, Charlie forgot his line [laughs]. He was like, “L…l…line?” and then [finale director] Wayne [Yip] had to, over the loudspeaker, be like, “That Sauron lives because of you.” [Laughs]

There was the intention to be secret, but then the actual filming of it ended up being a bit farcical in that way. But nobody who’s filming that wanted the secret out, so it was quite nice. But yeah, I think everyone in the canteen heard that. Is Galadriel keeping the truth about Halbrand a secret from Celebrimbor and all the other Elves out of shame and fear or out of protection?

She has seen the whites of the enemy’s eyes, and I feel she knows the rings need to be forged. There needs to be a great power against him. I think she fears they wouldn’t be made if they knew that Sauron was back. And we’ll discover whether that was wisdom or folly.

How have the events of the finale affected Galadriel, and how do you think she’ll change moving forward?

What I love about Tolkien is the whole idea of rejecting the ring is knowing your limits. I think she has learned a lot about her limits in this season, but also that she can’t go on a selfish quest for vengeance. I really liked that they melted down her brother’s dagger at the end, because now she really, truly has to try and protect Middle-earth. It’s not about chasing a foe because he has personally hurt her, even though he really has.

I’m glad that’s what we are exploring at this point. She’s gonna turn into the Lady of Lothlórien, which is a very secluded, secretive place for the Elves and where she’s seen as a witch by Boromir and the Rohirrim kind of fear her. [I’m interested in] seeing how she gets there and how she slowly starts to remove herself from the realms of men and everyone else, because we’ve seen her very much like an Elf alone in other cultures. I’m interested to see her kind of discovering her Elfness again.

Book and movie Galadriel knows the effect she has on everyone, and she’s used to that fawning attention she gets. We see that some in Rings of Power, but how does your Galadriel feel about that? Has she really noticed it?

I think that she’s in a state of dreadful grief. She has kind of trapped herself within the anger and the “this isn’t happening” part of grief, and so I feel like when I read the scripts and saw what was happening to her, that she was as far away from an Elf as she will ever be. She’s not noticing everything around her. She’s not finding joy in being part of the world.

Also, all of those types of other powers she’s had — from having an incredible intuition and attention to everything — she’s just not doing, because the main thing she’s carrying all the time is grief. And now, she has [been] through the other stages of it and will be different.

And how does she feel about Sauron’s proposition to be his queen and the emotional and moral meaning behind it?

I don’t think she’s truly tempted, but she’s tempted enough. She realizes that she is a type of atomic bomb, I think, there. And so there’s a care that she has to take throughout the rest of her existence, because she saw herself as good and as a hero. And now she’s seeing herself as more in the realm of Tolkien’s gray areas.

And also, I always loved Tolkien because — actually, it’s why my mom and dad love Tolkien and why they read it to me — it’s not so much good and evil. It’s hope over despair. She has been in a state of despair, and hopefully, she will discover hope again as she starts to fight for others.

I know the show didn’t have the rights to all of the book content, so navigating that was no doubt tricky. As a Tolkien fan before you did the show, how have these tweaks and changes been for you?

The more I’ve been in this industry, [I realize] the guts and the work it takes to do any sort of adaptation is just massive. And when you’re doing an adaptation, you’re always going to disappoint some, because what’s amazing about reading is that we all have these mind palaces of our own. But for me, when I was filming it, I felt like the 12-year-old me was in Middle-earth. It feels amazing to be in a piece of art that so much money and time has been able to be put into. I feel that that was kind of the only way that Middle-earth could have happened again, because it needs to be so huge.

I think they’ve just been very clever with it, and I’m glad I’m not doing it myself [laughs]. I’ve at times spoken to people who are involved in the rights of it. It’s been so interesting, particularly with Tolkien, because there’s songs that in one bit give access to loads of something that you didn’t have access to [before]. Then, the ambition behind it, I think, has been admirable and mind-blowing.

I have to ask, in the Battle of the Southlands scenes, were you the one flipping upside down on the horses?

No [laughs]. We had the most amazing team of riders. Lots of them were in the circus, and then some of them are trick riders. I have never seen anything like it. And just before shooting, they’d just be laughing, chilling out, and doing all these tricks, and I’d just be like, “Oh my God.” They were doing stuff that, to me, in my body, is as good as magic. I can’t believe that that was possible.

One thing I’ve loved about this series is that the fight and stunt choreography feels really fresh.

They were just amazing, and they were also the first people that any of the cast met. They were kind of at the heart of the cast not going mad in New Zealand away from all their family. They were the greatest team. And lots of them were in the original films as well.

The Lord of the Rings: The Rings of Power, Season 1, Streaming Now, Prime Video

People Rushed To BravoCon Panel And Then Booed Lisa Rinna 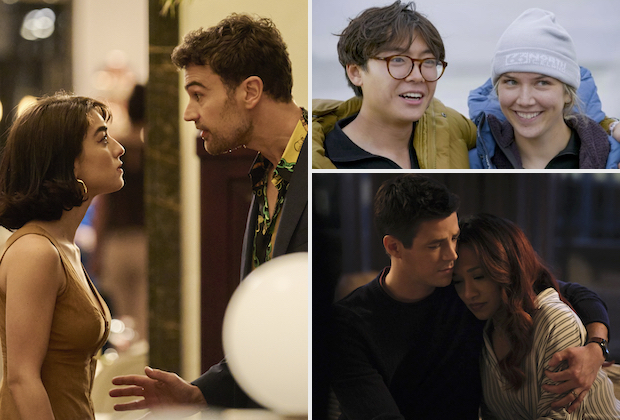