Matthew Perry wanted to be more than just Friends with one of his female costars on the NBC mega-hit.

In a primetime interview with ABC’s Diane Sawyer that aired Friday to promote his revealing new memoir Friends, Lovers, and the Big Terrible Thing, Perry admitted that he harbored a crush on costar Jennifer Aniston. (Years before Friends, Perry actually asked Aniston out, but she said no.) “Well, how can you not have a crush on Jenny? And Courteney [Cox]? And Lisa [Kudrow]? So I made it kind of difficult to go to work, because I had to pretend that I didn’t have these crushes.” He even wondered if he was staring at Aniston too much while shooting their scenes together: “Is three seconds too long?”

Perry also detailed the ravages that a lifetime of drug and alcohol addiction have had on him, telling Sawyer he recalls drinking an entire bottle of wine with his friends at age 14: “I lay in the grass and just was in heaven. And I thought to myself, ‘This must be the way that normal people feel all the time.’” By age 18, he was drinking every day, and he hoped his breakout Friends role as sarcastic jokester Chandler Bing might serve as a cure for his addiction. But the pressures of being on a massive hit only drove him deeper into drinking. 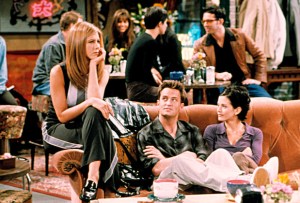 Perry told Sawyer he didn’t indulge while on the Friends set: “I made a rule that I would never drink or take anything at work… but I would show up blindly hungover. Like, shaking and crazy hungover.” Aniston confronted him about his drinking, telling him they could smell the alcohol on him. He turned to prescription painkillers after a jet-ski accident, eventually taking up to 55 Vicodin pills a day. To get them, he explained, he used “a bunch of doctors, fake migraines, all that stuff,” even going to real estate open houses just to go through their medicine cabinets and steal their pills.

While shooting 2002’s Serving Sara, Perry was so far gone on vodka, Xanax and methadone that they had to shut down production and have him dub in his dialogue later because he was slurring his words so much. He was driving back and forth to the Friends set from a rehab facility, including when Chandler married Monica: “I was driven in a big blue pickup truck to marry Monica from a treatment center.” Looking back on old episodes of Friends now, Perry said he can tell what substance he was abusing at the time based on how he looks: “When I’m carrying weight, it’s alcohol. When I’m skinny, it’s pills.” He cringed while watching back one Friends scene with Sawyer where he was particularly skinny: “I feel sorry for that guy. Because that’s a guy that’s out of control.”

Throughout his struggles, though, Aniston always checked in on him, Perry reveals: “She was the one that reached out the most… I’m really grateful for that.”

A Flat and Unnecessary Journey