Cue the John Carpenter music! In Thursday’s Halloween edition of what’s shaping up to be a scary-good season of Grey’s Anatomy, the interns were cast in a sorta “slasher flick” — in other words, challenged to slice and dice real corpses. Did any of them, ahem, make the cut? And did “Haunted” deliver as big a surprise with this week’s ending as it did last week? (Don’t recall what happened? Our recap will fill you in.) Read on and find out.

‘I ALREADY HATE THIS’ | As the episode began, Richard wheeled in a cart full of pumpkins on which the interns were to practice their carving skills. Hilariously, this was Mika’s worst fear — she had pumpkinphobia. She was even scared of pumpkin bread. Luckily, Nick soon scored enough actual bodies for them to Ginsu instead. On Link’s cancer-versary, he invited Jo to dinner and a foot rub. Alas, she had to work. So he was going to find a sexy-nurse date on Tinder instead. The first patients of the night were a couple of teens who’d taken LSD and jumped off a roof into a pool. Well, toward a pool, anyway — only one of the flying idiots hit the water. Still high as a kite after making a splash, the boy snuck out of the ER and leapt off an ambulance right onto poor Jo while she was dealing with a patient in labor. So much for Link’s sexy nurse. When the kids’ fathers showed up, they busied themselves with a shouting match over which youngster had given the other drugs. They were so loud that Bailey had to intervene — parenting is hard enough, she told them. They couldn’t turn on each other. 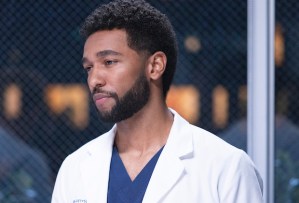 In Owen’s trauma training session with the cadavers, Winston upped the stakes by offering a chance to scrub in with him to whichever intern demonstrated the most impressive technique. While the residents fumbled, Winston confided in Owen that Maggie had taken to commenting on pretty much everything that he did — from his cases to the way he heats water. To raise Winston’s spirits, Owen suggested that they terrorize the interns a bit. After the “patient died,” Jules, whose parents were donating their bodies to science, was horrified to learn that Owen had stabbed all of the cadavers for the purposes of the newbies’ training. But how else would they learn? During round two, Winston remarked that observing the interns was like “watching kids stick their fingers into electrical sockets.” (Interesting reveal: Blue had no father. OK.) This time, the residents saved the “patient.” Who won the chance to scrub in? Well, they’d all contributed, Lucas noted. Could they all scrub in? Sure. Before leaving, Owen encouraged Winston not to let resentment take over his marriage. His solution? Considering leaving cardio to save their relationship. 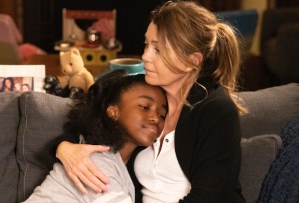 ‘I’M A LOT SCARIER WITHOUT THE SHEET’ | At Meredith’s, Amelia encouraged her sister-in-law and Nick to go enjoy a romantic evening. She’d babysit the kiddos while Zola was at a sleepover. Instead of take his girlfriend to his place, though, Nick got them a fancy hotel room. In which they seemed to spend most of their time drinking champagne and talking about Zola. Relating to the child’s situation, Nick told a story about how his mom had bought an RV to show him the whole wide world in which no one knew that he was the kid whose father had left him. So… road trip for Mer and Zola? Anyway, just then, the poor kid called in tears, and off Mer and Nick went to pick her up. She’d been trying to go to sleep, and all she could think about was her mom and her aunt and Alzheimer’s. It would get better, Mom promised. Even if they had to find her a school outside of Seattle. Ah, is that how Ellen Pompeo will leave after a few more episodes? 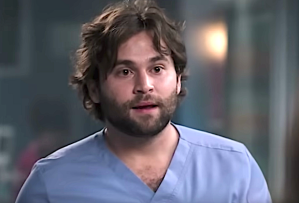 ‘WHO DOES ALL THE WORK, STACY? ME!’ | After campaigning to be chief resident, Levi buckled under the pressure of the job and barked at a nurse in front of Richard. Naturally, Webber pulled him aside. “Can you just say the thing I need to hear?” an impatient Schmitt asked. “Take a break,” Richard replied. Levi couldn’t, though — if he “took a break” and someone else died, he wouldn’t be able to come back from that. Later, Richard went to the bar to ask Helm to come back to work. No dice. She’d be leaving her bartending job with $800 that very night. In the episode’s last few minutes, Richard told Levi that he’d failed him and his class. Webber was going to ask all the attendings to pick up the slack left when they lost the last class of interns. 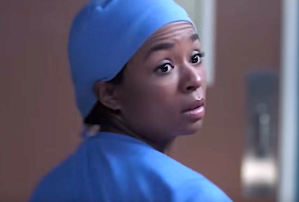 ‘TONIGHT WAS ENOUGH TO MAKE ME DREAD LETTING MY KIDS GROW UP’ | In surgery with Maggie, Simone’s phone beeped and beeped. (Uh-oh, I thought. Grandma?) Nonetheless, the kid who missed the swimming pool pulled through. After the incident in the O.R., Maggie asked Simone what was up — Pierce knew that Griffith was the intern to watch. So what happened? Simone had been a model resident in the gig she was asked to leave after finally voicing concerns about racial issues. That was why her phone had been going off: A video of her losing her ish — and understandably, after the mistreatment she’d received — had gone viral, and she had been trying to get it taken down. Later, Simone shared with her peers that she was the resident in the video. Finally, as the hour drew to a close, Teddy and Link commiserated over how one stupid impulse could ruin your life at any stage of the game. “I’m kinda crazy about Jo,” he blurted out. It hadn’t been an option… then it was… and now? “I blew it,” he said. “Just keep sleeping with other women until those feelings pass,” she advised. Don’t let what happened to her and Owen happen to him and Jo. Off that convo, Teddy found Owen sleeping in the lounge and reminded him of how he’d managed to give her several holidays in one while they were deployed. It was a sweet moment… during which he dozed back off.

So, did “Haunted” scare you up an entertaining hour? Hit the comments with your thoughts.

The male characters in the films of Ruben Östlund

16 Tweets That Sum Up The First Few Episodes Of "American Horror Story: NYC" So Far