Thursday’s Grey’s Anatomy not only marked Kate Walsh’s latest return as Addison, it brought Bailey back to Grey Sloan, where the two of them teamed up with Jo to produce a series of social-media videos in which the interns taught sex ed. Needless to say, what happened next was more complicated than, “Well, when a bird really, really likes a bee… ” and if you read on, we’ll go over all the details.

’YOU’RE GETTING PAID TO TALK ABOUT SEX TODAY’ | As “Let’s Talk About Sex” began, Lucas skateboarded to Grey Sloan, Amelia struggled to find a way to get to see long-distance love Kai, only to discover that they were already in Seattle (surprise!), and Zola came to the hospital with Meredith rather than go to school (as the youngster was still having panic attacks). Nearby, Bailey turned up at her old stomping grounds, having been given permission by Nick to use the interns in the sex-ed project that she and Jo had mounted in the wake of Roe v. Wade being overturned. When Addison, in town to work with Bailey and Jo, crossed paths with Lucas, she warmly greeted him as Shep… before he discreetly made it clear that she wasn’t supposed to acknowledge that he was Derek’s nephew. From the get-go, the interns tried to make excuses not to participate — and that was before they found out that they wouldn’t just be speaking to a video camera, they’d be speaking to a roomful of real kids. As the interns bombed reading from Jo’s script, one of the teenage girls fled from the room and admitted to Addison that she was late. Back in the auditorium, another girl keeled over in pain. 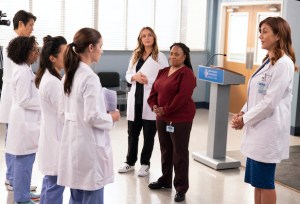 While Jules got the kids’ attention by explaining where the clitoris is, and Blue shared why the pullout method was so ineffective, Girl No. 2 turned out to have a giant cyst. Called in to the O.R., Addison tasked Levi with reassuring Girl No. 1 as she waited for test results. So he had to be the person who confirmed for her that yes, she’d gotten pregnant after the first time she ever had sex. But at least he was able to explain that they could give her pills to medically abort so long as they’d caught the pregnancy early enough. (They had.) Eventually, Jules recruited Owen and Teddy, of all couples, to teach the youngsters about consent. The interns also schooled the kids on how different actual sex was from porn sex. (Spoiler alert: very.) 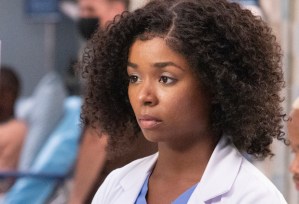 ‘I’M A VERY HAPPY PERSON, HE’S JUST BITTER AND BROKEN’ | Though Lucas supported Bailey, Jo and Addison’s project, he needed more pit time, so he volunteered to help Teddy (especially since Owen was worse than useless to her at present). Soon, he was assigned by Levi to help Joyce (aka Simone’s grandmother) find her daughter, who she believed was giving birth that day. (As we already knew, Simone’s mother died at Seattle Grace giving birth to her.) Soon enough, Joyce said that if her daughter had a girl, she’d be named Simone. Lightbulb moment for Lucas. Then, in a horrifying moment, Simone had to tell her grandmother again that her mom had died. Meredith to the rescue. (Well, insofar as she could help, what with not being able to resurrect Simone’s mom.) Griffith wasn’t sure that she could handle her grandmother’s condition. But Grey assured her that as she’d had to be with Ellis, Griffith could be with her grandmother. After Mer suggested that letting Joyce live in her reality might be the kindest option (as opposed to telling her over and over that her daughter has died), Simone went ahead and played her mom for Joyce. (Heartbreaking stuff.) Later, Simone thanked Lucas for staying with her grandma all day and asked him not to tell anyone about her condition. If he could keep his lips zipped, Simone added, she wouldn’t reveal that he was a Shepherd — yeah, she’d figured it out after he’d been so weird with “Aunt Addie.” 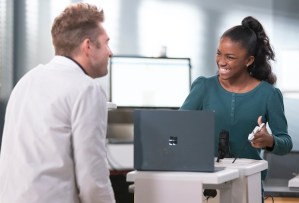 ‘TEN YEARS OF TRAINING, AND I’M BASICALLY PLAYING A VIDEO GAME’ | Bored with her homework, Zola snuck out of Mer’s office in search of a surgery to watch but wound up being intercepted by Nick, who showed her cool gadgetry in his lab. Did he always know that he wanted to be a doctor? she asked. No, not until his mom had died. When Kai came in, they were impressed by Zola’s cognitive abilities on neurological tests that were lying around. So was Nick, who called in Amelia and Maggie to see how brilliant Zola is. When Mer arrived on the scene, ticked that her daughter had taken these tests without her consent, Maggie and Kai suggested that Zola’s genius might be what was sparking the panic attacks. 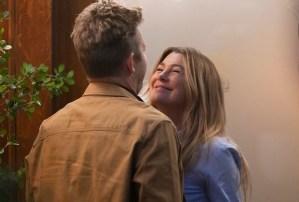 ‘WHAT ARE WE POINTING AT?’ | As the hour neared its conclusion, the docs all busted out dance moves for the sex-ed reel. (Glee vet Harry Shum Jr. was, of course, killer.) When Richard asked Bailey when they’d see her again, she suggested… tomorrow. Given that there was a humanitarian crisis going on, she wanted to open the clinic again to protect reproductive rights and work as an attending the rest of the time. “That’s my best and final offer,” she said. Natch, Webber accepted it. Zola’s brilliance sparked memories in Maggie of her own childhood; she couldn’t believe that she hadn’t noticed it in her niece. What had helped Maggie? Amelia asked. A child therapist had given her coping tools. Zola would get her tools, Amelia promised. Richard invited Addison to dinner, but she wanted to work. After Roe v. Wade, she felt “erased.” He encouraged her to live, too, and eat. Finally, Mer admitted to Nick that she was lost as to what to do for Zola. He saw the upside of the day — they now had a piece of the puzzle that they hadn’t had before. At home, inspired by their sex-ed presentation, Teddy gave Owen consent to get it on with her. And at the same time, Amelia and Kai got busy. (Not all of them together, mind you.) And as Link massaged Jo’s feet, she shared that she’d learned that even they had erogenous zones. “Should I stop?” Hell, no. At the hospital, Lucas and Simone looked to be getting awfully chummy, and Blue and Jules snuck into the on-call room to have sex. “I don’t even like you,” she said. “I’m not for everyone,” he replied. Love! These! Interns!

Hit the comments with your take on “Let’s Talk About Sex” and Season 19 as a whole so far? Far as I can see, if it isn’t firing on all cylinders, it’s sure firing on most of ’em!