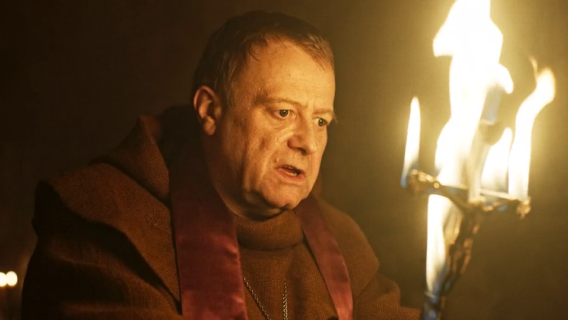 We like to keep an eye on the Netflix horror titles making waves on the other side of the pond. One of the best ways to do this is by checking in on the official Netflix Top 10 charts, which update regularly. This week on the Global Non-English charts we’ve spotted a must-see title that has gone under-appreciated on the side of the globe.

Coming in sixth place is Hellhole, directed by Bartosz M. Kowalski, who also co-wrote it with Mirella Zaradkiewicz. This is the same team who brought us Nobody Sleeps in the Woods Tonight. Hellhole stars Piotr Zurawski, Olaf Lubaszenko, and Sebastian Stankiewicz and is a unique Polish horror movie that is freaking out fans all over the world.

Netflix describes Hellhole as, “Exorcisms. Disappearances. Something sinister is happening at the monastery in Lower Silesia, Poland – and the monks will do anything to hide the truth.”

There are not nearly enough Polish horror titles readily available on American streaming channels, so this one definitely caught our attention. The film has an 88-minute run-time and reeks of disturbing religious spooks from top to bottom. So why not go ahead and add this to your watch list? Netflix has the uncharming habit of dropping international horror films off with zero fanfare, making them a bit hard to spot in the haystack.

Even Reddit has things to say about Hellhole. Check out this glowing review for a Redditor here:

Check out this wild clip from Hellhole on Netflix:

Have you had a chance to check out the Polish horror shocker Hellhole yet? It’s on Netflix, so why not give it a go?

Let us know what you think of it afterward on Twitter via @DreadCentral. We are always around to chat about all things international horror!

Dread Central is on Google News. Drew Barrymore Welcomes Allison Williams By Dressing Up Like ‘M3GAN’