‘The Simpsons’ spoof ‘It’ on October 23rd 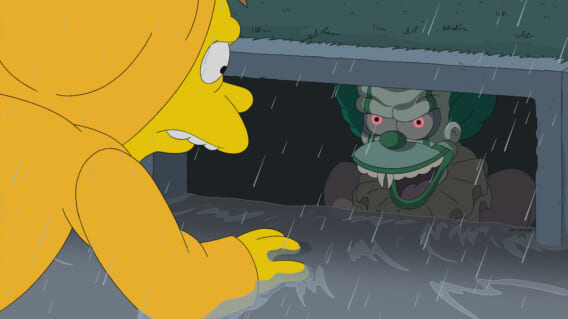 In a never before seen act of Halloween mayhem, this year we will be receiving not one but two Treehouse of Horror specials from The Simpsons. According to Variety, the first showing will be a regular old anthology of horrors like we are accustomed to seeing year after year. The second episode will be something we’ve never seen before in Springfield. It will be a full half-hour dedicated to spoofing Stephen King’s It. Today we have our first look at the episode, being dubbed Not It. Check out the cool images below.

Known for their regular take-downs of pop culture behemoths, it’s no surprise that The Simpsons are coming for Pennywise the Clown. 2017’s It: Chapter One is officially the highest-grossing horror film ever made. Unlike the demonic clown, Stephen King’s magnum opus is pretty much unstoppable, with the prequel series Welcome to Derry currently in production at HBO Max.

You have seen a Krusty the Clown as Pennywise tattoo out in the wild over the years. Well, The Simpsons executive producer Matt Selman speaks to Variety about the crossover.

“We’ve never done a single fantastical, bloody, scary, dark story, told over the scope of the 20 minutes and 40 seconds that is an episode. I think the fans are going to be really excited. Certainly, the tattoos already exist of Krusty as Pennywise. So we’re just writing about the tattoos now. You want as many tattoo-worthy moments in your episodes as you can.

Check out these killer It parody images from the upcoming episode right here. The Not It episode of The Simpsons airs on Sunday, October 23nd.

Stephen King’s It is a horror novel about a group of seven children who are terrorized by an evil being that exploits the fears and phobias of its victims. The novel was originally published in 1986 and was adapted for television and film in 1990, 2017, and 2019.


Tags: It Stephen King The Simpsons

Listen To This: Make You Feel Something!