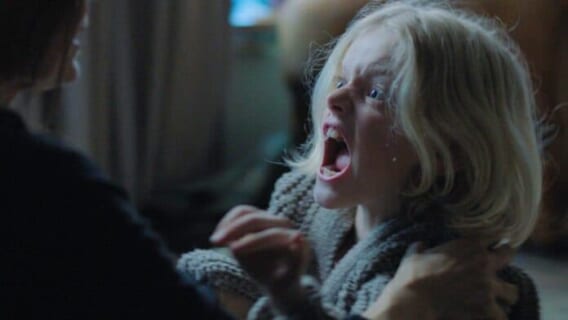 Netflix has had some pretty remarkable international horror offerings. Kevin Ko’s Incantation was a terrifying, subversive found footage outing, one of the scariest movies to make use of the format in years.

2020’s Don’t Listen was The Conjuring with considerably more danger. The Call is a criminally underrated time travel slasher that should go down as one of the century’s best. Now, audiences are flocking toward The Chalk Line (also known as Jaula), Ignacio Tatay’s Spanish-language horror debut.

For the week of October 24, The Chalk Line cracked Netflix’s Top 10, landing at number 5 for the most watched movie of the week. That’s an incredible accomplishment for a debut horror feature, especially one released with little to no marketing weight behind it.

In The Chalk Line, Paula (Elena Anaya) and her husband Simón (Pablo Molinero) find a young girl, Clara (Eva Tennear) standing alone in the middle of the road. They take her to the hospital and wind up inviting her into their home.

All manner of spooky, domestic terrors ensue, and given the digital success, it has clearly resonated with audiences.

While Netflix has been met with derision for its chuck-and-dump release method before, especially when it comes to genre films, it is pretty cool to see a small Spanish horror flick from a new creative top the charts.

What do you think of The Chalk Line? Have you had a chance to check it out? What other horror films on Netflix are must-sees? Let us know on Twitter via @dreadcentral!

If You Call Yourself A Swiftie, You'll Want To Take These 14 Quizzes Immediately