Snow has started to fall in some states around the country and department stores have begun their annual Christmas sales. But wait, isn’t there another holiday between now and Christmas? Something about Pilgrims and Indians? Thanksgiving is slowly becoming the forgotten holiday, but not to worry, because I have compiled a list of the best Thanksgiving themed horror films to get you in that turkey eating spirit! So grab everyone in your family and curl up in front of the TV and prepare to never look at a turkey the same way again

I apologize for this list being so small, but Thanksgiving doesn’t seem to be that marketable in horror. 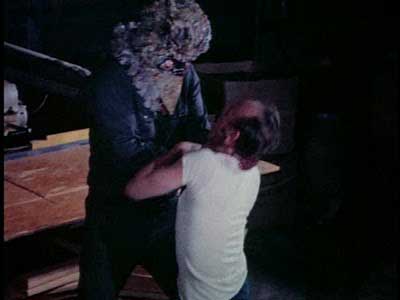 Blood Freak (1972)
Okay, so this movie doesn’t revolve around Thanksgiving, but it does revolve around a deranged man with a mutant turkey head killing people. Still interested? Read on. This movie is probably the hardest movie to find, I couldn’t find it at the local movie chain, or with any online subscription, so in order to find it I had to use other way that involved the Internet (I’ll let you use your imagination to figure out what I used).

Now let’s move on to what this movie is about. Like always SPOILER ALERT. The film starts out with two people driving on the road, Angel and Herschell. When their eyes lock they pull over and instantly bond. Angel then invites Herschell to a party that is full of drugs and slutty women. Herschell keeps his cool and declines any offers of drugs or sex. But later that night Angel finally gets Herschell to agree to smoke the reefer and have sex. Later on Herschell is offered a job at a turkey farm where he gets involved with some scientists who are experimenting with ways to modify turkeys. Herschell agrees to be the guinea pig and eats the experiment turkey meat. He begins convulsing and is ditched by the side of the road by the scientists. Herschell then begins to go through interesting changes in his body. His head soon turns into a turkeys head. The rest of the film is Herschell trying to kill people turkey style because he needs his drug fix. He even begins killing people to drink their drug infused blood. However, by the time the movie ends you find out that everything was just a dream triggered by the marijuana that Herschell had smoked.

Yup, the whole movie is a giant anti-drug ad. However, despite being utterly pissed by the films end, I did enjoy watching a half man-half turkey going around and killing people while I was eating KFC. 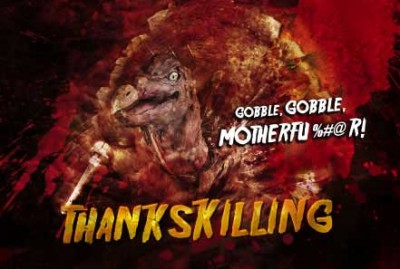 Thankskilling (2009)
I am still in shock after watching this movie. According to the IMDB page, this film was made for $3,500, and that may even be a stretch. This film is about one thing: A murderous turkey with one FOWL mouth. The film also has the typical stereotyped breakfast club gang, a jock, a good girl, white trash, a slut and a nerd. They all come home from college during thanksgiving break, but none make it out alive! This movie actually isn’t as bad as the summary makes it sound. It’s chocked full of low-budget horror humor, and lots of boobs. The hand puppet looking turkey could have used some upgrades, but you get the picture. The theme song of the film is also quiet the gem. Think of it as the Halloween theme song, but with turkeys. Finally, this movie has some of the best lines in low budget horror. My favorite would be “Gobble Gobble Mother Fucker!” So if you can enjoy this movie for what it is, independent horror craziness, then it is worth a watch, plus its only 70 minutes long.

Note: Was followed by sequel: ThanksKilling 3 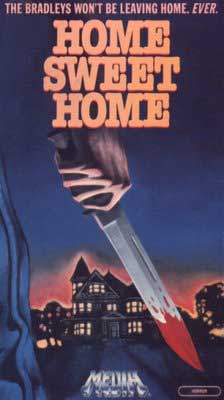 Home Sweet Home (1981)
The two previous films have been films that were trying to convey a certain message, one being an anti-drug ad and the other trying to be funny. But Home Sweet Home is trying to be scary and climatic, but fails MISERABLY. This film feels very rushed, especially since I think lights were left out of the budget. It came out in the hay day of slasher films, so it could be that there were talks of other studios making a Thanksgiving themed horror flick and Home Sweet Home wanted to be the first one out.

The film is about an escaped mental patient who finds a family celebrating Thanksgiving and decides to kill them all. The kill count is pretty high, but also is the kill count of cars. This family has more bad luck with cars then I have ever seen in any horror film. One car has a bad battery, another a bad fuel gage, another the clutch is out, it is never ending. But the films villain is quite the character, especially his laugh and his facial expressions. Finally, this film has more plot holes then a film about Swiss cheese (yeah I made that joke). So in the end should you watch this movie? God no, but it is the only horror film that is actually about Thanksgiving Day. 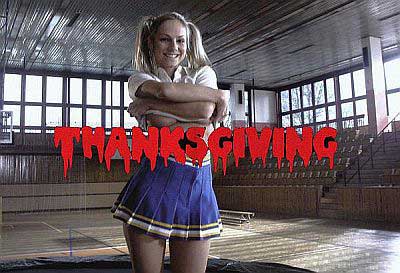 Eli Roths Thanksgiving (2007) While this is not a movie (yet) it is still one of the best potential films about Thanksgiving to date. I mean what would be better than seeing someone get their head cut clean off during a Thanksgiving Day parade? There are rumors about this being made into an actually film, but I wouldn’t hold my breath.

The 3 Best, and Only, Thanksgiving Themed Horror Movies

Riverdale Theory: Could Riverdale Be Set In Jughead's Book?

Life Is Extra Hard For Me Right Now | Perez Hilton