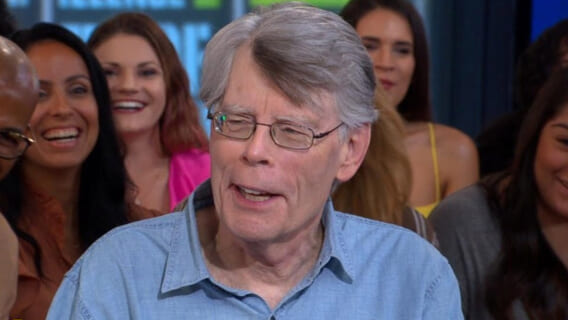 Liminal spaces are having a moment in the horror genre right now. And they should be. These spaces that feel suspended in time and space are the definition of cosmic horror, filling you with existential dread and unease. The new Apple+ series Severance deftly taps into that fear in this bizarre workplace thriller. It’s also captured the attention of horror master Stephen King.

Mark leads a team of office workers whose memories have been surgically divided between their work and personal lives. When a mysterious colleague appears outside of work, it begins a journey to discover the truth about their jobs.

As best-of-the-year lists being to roll in, creator Dan Erickson‘s series pops up pretty consistently. From praising its examination of labor exploitation and poor treatment of workers to celebrating the masterful performances of the ensemble cast, Severance is getting its well-deserved flowers.

Its twists and turns spoke to Stephen King. First, he sent a rather vague tweet about an unnamed crazy new series.

Then, after finishing the series, the author shared his full reaction. Like most of us, King couldn’t get enough.

It’s apparent that the horror fiction master has been a fan of Severance from the beginning, proving yet again that King has impeccable taste in horror media.

See the Severance trailer for yourself:

No word yet on when season two is coming, but check back to Dread Central for more information as we get it.

Did you watch Severance? Do you agree with Stephen King’s review? Let us know over on Twitter @DreadCentral.

Dread Central is on Google News.

25 Things You Don't Know About Me

Q&A: Matt Maguire (SawBorg Destructo) Discusses the Enduring Legacy of GWAR and the New Graphic Novel GWAR: IN THE DUOVERSE OF ABSURDITY