What’s better than watching horror together? Making it together! 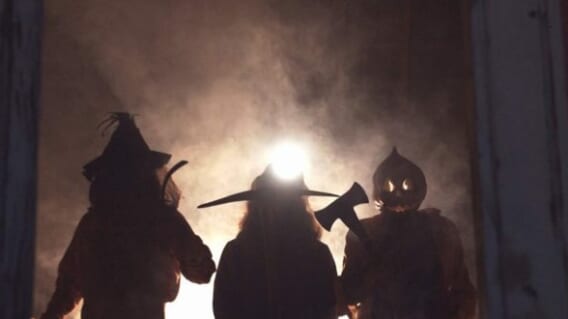 Friday brought forth the first full day of programming at Nightmares Film Festival 2022 and it was packed to the brim from start to finish. In addition to seven blocks of short films (including a delightful one dedicated to animated horror), six features screened, all showing different corners of the genre.

The French horror comedy Super Z had zombie cinema covered, this time in the high concept form of the wacky adventures of a family of genetically-modified undead. Fans of gonzo comedic horror might want to keep an eye out for this one.

Influencer culture has been a big theme this year amongst the fest selections, both in terms of shorts and features. Follow Her is no exception, dishing out a character-driven thriller dealing with the dark side of social media fame.

Brit entry Walking Against the Rain offered up a touching, soulful post-apocalyptic drama about survival, guilt, and hope that also happened to have some pretty cool monsters in it. What more could one ask for?

Then there’s Brain Death, a coming-of-age tale about a trans woman confronting an ancient evil. Queer horror is wonderfully ever-present at Nightmares and this year is no exception. As it should be. Diversity is an important pillar holding up horror for us all and the more varied voices we get within the genre, the more new and intriguing stories we get as a result!

Of course, we horror fans also sometimes crave something a bit more familiar and Nightmares Film Festival 2022 hasn’t disappointed on that front either. The much-anticipated sequel The Barn Part II played like gangbusters with a crowd, delivering just as much candy-coated horror fun as its predecessor, with plenty o’ familiar faces like Doug Bradley, Joe Bob Briggs, Diana “Darcy” Prince, Linnea Quigley, and Troma god Lloyd Kaufman in tow. If you’re a fan of the first one, you’re going to find a lot to like here!

The familiar faces didn’t stop with such genre veterans, however. Anyone who has had the pleasure of attending Nightmares Film Festival in the past—especially those of have been more than one year— is bound to recognize some familiar faces (and names) in the aforementioned The Barn Part II and various shorts playing this year. Not to mention the raucous horror comedy feature Obstacle Corpse, written and directed by local Columbus filmmaker (and Fright Club co-host) Hope Madden!

I know that when Jason Tostevin and Chris Hamel launched this fest seven years ago, in addition to gifting attendees with stellar indie genre cinema programming, they had hoped some new and exciting collaborations could result from the mixing of minds at the fest. Well, mission accomplished, gentlemen! I cannot even begin to count how many times I’ve been sitting in a theater at Gateway Film Center over the past five or six years and realized that the short or feature I just watched happened as a direct result of the filmmakers involved meeting at NFF the year before. It happens more and more every year, with this one being no exception.

Seeing the people whose work you admire every year making art together is truly something special and films like The Barn Part II and Obstacle Corpse are perfect examples of that. Both are packed full of alumni both in front of and behind the camera. Obstacle Corpse‘s director of photography, Brooklyn Ewing, is also the writer/director of previous NFF selections She Was So Pretty and She Was So Pretty: Be Good for Goodness Sake. She also worked on and appears in The Barn Part II, as is her partner-in-crime, actor Jerry Larew!

These two films combined also hold contributions from Mike Lombardo (I’m Dreaming of a White Doomsday), David Greathouse (Scare Package 2), Daniel Alan Kiely (Bong of the Living Dead), and Tiffany Kiely (Born Again). And guess what? All of those films played Nightmares Film Festival as well. This is what I’m talking about when I say that this festival truly has a wonderful, thriving community surrounding it. Not only do these filmmakers (and fans – some of these projects were crowdfunded) support one another’s work, but they actively participate in it.

If you recognize those names, then you already know what I’m talking about. And if you don’t? Well, then consider the films listed above for the next time you’re in the mood for some grassroots indie horror. Because when it comes to that particular type of genre cinema, these are some of the best people working in that field right now.

Who knows? If you come to Nightmares Film Festival someday, perhaps you too will eventually be pitching in on a film as well. That’d be pretty cool, wouldn’t it?

Cardi B Goes OFF On Madonna For Calling Her A Bitch & Using Clown Emoji In Sex Book Anniversary Post: 'Icons Really Become Disappointments'