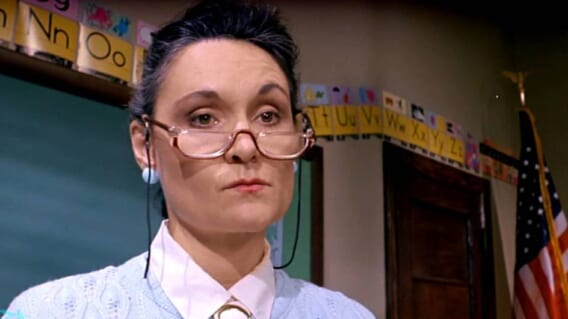 Being an educator is a tough job that comes with endless responsibilities and limited pay. Educators are expected to work well under stress with scarce resources. Sometimes it feels like trying to drive a school bus full of wild chickens up a mountain on a rainy night. This is why people often refer to teachers as heroes, but at the end of the day, we are simply people. As humans, we have the potential to be both great, or, absolutely despicable.

This should go without saying, but some people should NEVER be teachers or even step foot in a classroom. On that note, we’ve drummed up a list of horror movie humans who would be better off working 100 miles away from children. We’re not sure how some of the people were hired in the first place.

The Dean of students is supposed to provide a safe and helpful environment on-campus. The dean in Pieces does the exact opposite. He is running around campus killing women left and right! He’s even committing some of the murders in broad daylight. Imagine that you are studying for your Oceanography class outside in the sun and a cloaked figure decapitates you while everyone is going about their day. This same person would be pretending to enforce safety measures to prevent further murders. He is the kind of colleague that would steal your stapler and help your look for it.

He is killing students and stealing their body parts for a sick puzzle. He is also clearly into some kind of black magic because his macabre puzzle is somehow … alive. I think the dean, also known as Timmy, should log out of his work computer and walk straight into solitary confinement.

All teachers have a responsibility to keep their relationships with their students professional. This also extends to college students. It does not matter if a student is over the age of 18, they are still a student. But Enrico Rosseni here does not seem to care about professionalism! When the audience is introduced to him, he is making out with a student. He obviously also thinks his image is more important than someone getting killed as he encourages a student to believe she didn’t witness her classmate clearly getting stabbed. Rosseni is even called into a meeting with the police because his inappropriate relationships with the students are known to the other staff members. Someone needs to escort Enrico off of the campus forever. Oh, did I mention he’s married?

It’s important that educators have structure, guidelines, rewards and consequences in the classroom. But focusing strictly on discipline sucks the joy out of the classroom. And cruel punishments only create a hostile work environment for students. Speaking of which, Mr. Oh is an extremely hostile character. He believes in corporal punishment in the school setting, which is obviously outdated, not to mention ineffective in the long run. When a student creates a macabre painting, Mr. Oh uses this as an opportunity to physically assault her in front of the entire class. He hits the student several times, which includes slapping her in the face. He calls her terrible names, destroys her art, and kicks her out of class. He also sexually harasses students! If anything bad happens to him, he deserves it.

I think Miss Kettlewell is a special kind of evil because she is mean to small children. Andy came to school after dealing with a traumatic incident and you would think a teacher with a responsive classroom would show some compassion. Unfortunately, she and the 90’s school system had nothing but cruelty in store. When he’s in trouble, she does not even try to get Andy’s side of the story, nor does she ask if anything was going on at home either. Instead she went straight for a consequence that ultimately put Andy in grave danger. Of course, she wouldn’t know that a killer doll is chasing Andy, however, locking an 8-year-old in a classroom alone has got to be a fire hazard. Anything could have happened to Andy while he was unattended. We believe she deserved every swipe of that ruler. If she wasn’t dead, we would request that she goes on administrative leave immediately.

While Mr. Fromm did not have many scenes in Carrie, his introduction told us a lot about who he was as a teacher.  A classroom is supposed to be a safe space for students to express themselves respectfully and try new things. Teachers are there to encourage students to step in different directions and to open their minds to their own abilities. This is one of the most sacred aspects of teaching. Mr. Fromm encourages his classroom to be a toxic work environment for its scholars. A student submits excellent work and instead of praise or encouragement, Mr. Fromm teases him. He also mocks a student who praises work. Mr. Fromm let the class descend into laughter and made his students feel small. He is a bully and bullies have no place in the classroom, especially as teachers.

Don’t forget to check out the Girl, That’s Scary: Back to School mini-series that has already begun and runs all September long! Subscribe to the podcast anywhere you listen.

Emily in Paris Season 3: How To Get the Emilycore Look